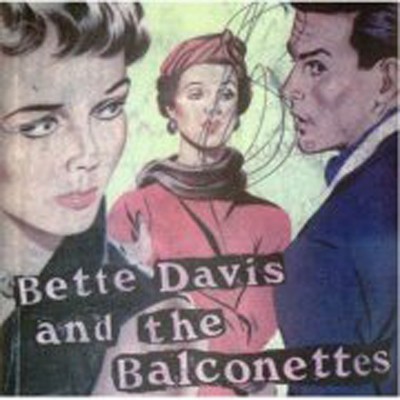 BETTE DAVIS AND THE BALCONETTES

We released 4 singles and an EP on Baby Boom, Damaged Goods and Slampt between 1996 and 98:

John Peel Festive Fifty entry at number 15 I think, Single of the Week in Melody Maker, Single of the month - Record Collector, Single of the Year on Radio Lancs 'on the wire' show. Radio debut on Radio 4. Two singles recorded at Lisa Stanfields studio... yes, we have sat on the same toilet as Dionne Warwick.

We also played at the last ever night of Leeds superclub Vague...introduced thus.... "this is our last night, Im sick of it, here is punk rock you fuckers..."

Our gigs were chaotic - either great or rubbish. We played Manchester less than London, Glasgow, Newcastle and Brighton where we had a big fan base. Manchester in the mid 90s was a bit like an Oasis demo tape....

The people who supported us in Manchester can be counted on 1 hand.

Do yourselves a favour - ignore Manchester music as it is told by most people. It is smug and irrelevant and the same people are STILL around as when we were going, telling the same tired stories they always told for the same tired reasons.... money, career, ego.
Artefact added : 1st July 2009
by tenchahoy

Bluemauvey Says –
I think I was the tape-op on that Oasis demo tape.

Did I ever tell you about my exploits with The Stone Roses and the Happy Monday's, lol.

Bluemauvey Says –
From the hip, via the fingertip. Poor BDB, lol.

Abigail Says –
I think you make some very interesting points here, 'Tenchahoy'. Perhaps it's true that Manchester doesn't take the piss out of itself enough. I agree that certain bands and scenes are fawned over ad nauseum.

There are many 'Manchester classics' that I hope never to hear again for the rest of my life. But it's not the fault of the music ITSELF that it is picked apart until there is nothing left. I'm sure if we could all go back and listen to those aforementioned tracks with entirely fresh ears, we may once again hear their genius.

Manchester District Music Archive is passionate about telling the untold stories of this city.

I, for one, am often more excited by the accompanying recollections that people upload than the artefacts themselves. I love the social history element. But it is natural, with a user-led Archive, that famous bands, venues and scenes will crop up more than others.

I can assure you that the contents of this site has absolutely fuck all to do with Manchester City Council's agenda for tourism.

Last year we put on the 'Electrospective' event, which celebrated electro-funk and black music culture pre-rave, pre-Hacienda. We are currently planning a similar event exploring Gay music culture in Manchester from the 1950s to the present day. I think these are two examples of stories that deserve to be told.

On another point, I too, played in a band that was completely out of step with the Oasis clones of the day. We were totally ignored as well! I sympathise with what you are saying here, but I think it's important to avoid being too reactionary and idealistic, as I was for a while. You can shut out all the great stuff that's out there.

FYI: Since its inception, MDMArchive has had precious little funding and survives because volunteers like me compose responses like this at home, at twelve minutes past midnight just for the sake of it.

It is fair to point out, though, that without Manchester Digital Developement Agency's help and advice over the years, there might not BE an Archive for us all to rant and rave on.

Sometimes you have to look at the bigger picture.

And, yes, everyone knows that Factory put out some fucking wack records. But what about Marcel King's 'Reach Out For Love?' That's my favourite. Do the Balconettes have a bomb like that in the back catalogue? ;-)

Thanks for sharing your thoughts, anyway. That is what this site is for.

Here's to more uploads and ranting.

tenchahoy Says –
Said my bit regarding Mcr music, and have deleted my previous comments. LOL

davemossy Says –
Bette Davis and the Balconettes were an amazing band and easily the best thing out of Manchester, I totally agree with your thoughts regarding the manchester music scene, it is self celebratory to the point of revisionism, where certain raconteurs remininscences have become the official history, disregarding the many scenes that occurred outside of the mainstream. This archive is of course vital to the real history of Manchester music...for the record i delight in playing Balconettes songs to music lovers from all over the world and they are usually equally delighted to hear them.

tenchahoy Says –
Thanks Dave, if you go to Mediumwave podcast at : mediumwave.podoma... you can hear a recent
interview we did. Episode 18.

davemossy Says –
aw what a great interview, was talking with Rodger who took lots of photos and did some driving for you, asked if he had any video, sadly he didn't, but, been listening a lot lately, gets better with age. Good Luck, one day would like to make a documentary about you, or even a dramatisation like the Runaways!!!! that so needs to be done...

tenchahoy Says –
Ha Ha - it would be appalling!!!!

I actually have video footage from a couple of gigs somewhere. Thanks for your kind comments.

davemossy Says –
appalling yes, necessarily so!!
That video is priceless!
thank you for everything you did! I thought music was dead back then, thought nothing else would surprise me, but then i heard a tape you did and realised, you were jumping on the corpse of rock and roll, making it dance again!

FranDaman Says –
Shortly after I read this post, a couple of weeks ago, I found the whole Bette Davis' back catalogue in a charity shop in South London. Quite spooky really!

FranDaman Says –
This and a couple of the others are signed too. I will do a bout of scanning soon and post them!
If you'd like to leave a comment, please Login. Login
Manchester Digital Music Archive is licensed under an
Attribution-NonCommercial-ShareAlike 4.0 International License.
Charity no. 1164179
Our archive currently contains 3817 Bands, 743 DJs, 1437 Venues, 298 Industry Professionals and 28834 artefacts contributed by 3927 members.