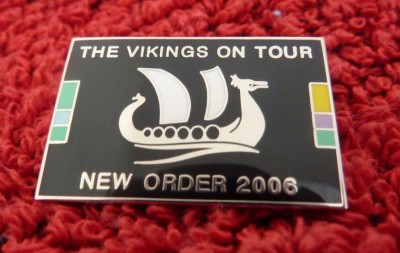 Badge produced by hardcore New Order fans, the Vikings, for the first Manchester Vs Cancer event at the MEN Arena and subsequent dates

As well as a set by New Order, who played only Joy Division songs, members of the band played in various collaborations on the night, including a performance of the Monday's song Wrote for Luck which several people described as 'memorable'.

A strict Viking code of secrecy protects the meaning of the badge's coded message, which uses the colours developed by Peter Saville for the sleeve of Power Corruption and Lies.

OT Says –
yowser! how many diy badges have the vikings made for themselves?
If you'd like to leave a comment, please Login. Login
Manchester Digital Music Archive is licensed under an
Attribution-NonCommercial-ShareAlike 4.0 International License.
Charity no. 1164179
Our archive currently contains 3860 Bands, 758 DJs, 1458 Venues, 316 Industry Professionals and 29647 artefacts contributed by 4037 members.