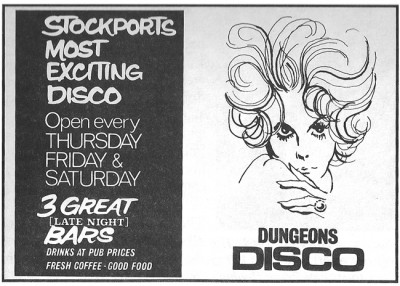 Newspaper Ad. in the Stockport Express for the Dungeons. Situated on Lawrence St. (at the top of the Plaza steps, off Mersey Square), Stockport.

For a brief period, the club started Sunday all-dayers, featuring live music. A band booked by Harry were SlowGuns. The combo has the distinction of being the first act to appear at this event.
Artefact added : 29th July 2009
by Pod

Abigail Says –
Great flyer! Thanks for the uploads, Pod!

Treble99 Says –
Did this club later change its name to Smugglers?

Pod Says –
I believe it did ... I think it had another name too. Today it’s joined to an all-you-can-eat Chinese restaurant!

Treble99 Says –
If it was Smugglers, i remember going to see the punk band Blitz there in 1983, some of the gig was filmed by The Tube, my other main memory was having to walk home from Stockport to Glossop cos there was no buses

robo2009 Says –
i think dungeons was at the bottom of the plaza steps underneath the Ups and downs pub(another great place now closed and been empty for years) smugglers was at the top of the steps now part of the chinese resteraunt.

Debbie Hart Says –
You actually entered Dungeons via a door located to the right at the top of the steps next to the Plaza.
Directly infront of the door was steps leading to the office where you paid to get in, to the right was the cloakroom and then you had to go down more steps to the bars and dance floor (passing the ladies toilet on your left)
It was a great place to go and was always full.
Had loads of great nights there :0) and then had to wait for a taxi home in the long queue opposite the CO-OP!
If you'd like to leave a comment, please Login. Login
Manchester Digital Music Archive is licensed under an
Attribution-NonCommercial-ShareAlike 4.0 International License.
Charity no. 1164179
Our archive currently contains 3716 Bands, 737 DJs, 1380 Venues, 252 Industry Professionals and 26774 artefacts contributed by 3782 members.