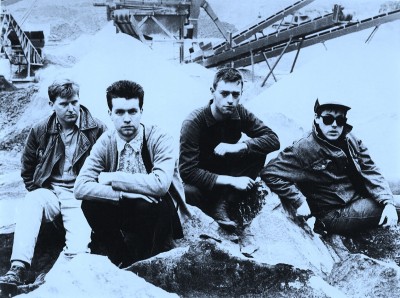 It happens all the time...

.. a band has all these great tunes,energy and originality and, lo, their timing proves abject.

And so it was with The Monkey Run. Having spent the fat end of five years priming their run at the big (ish) time, they missed the good ship Madchester and became an 80s Mancunian guitar-pop footnote.

The nucleus of the band formed in Rochdale, 15 miles north of the big city, in 1982. Mark Hodkinson (guitars), Jim Stringer (vocals & bass) and Terry Eves (keyboards) were freeform and punk; swapping instruments (and drummers), improvising as they went and getting banned from venues with irritating regularity.

"We were into challenging perceptions, shaking things up," said Mark. " We did one gig where we said we'd fill our spot with whatever we felt like doing. We made it up on the spot. You could always rely on Jim to sing something half decent."

With the addition of drummer Craig Henderson, the band established an equilibrium and learned to write - and play. Although none of them would have been invited to work as session musicians for Mark Ronson. "We didn't worry too much about technique," said Terry. "In fact it was quite reassuring that, if you f*cked something up, someone else would do exactly the same within the next 10 seconds."

But what they lacked in finesse, they made up for in a fizzing cocktail of energy, attitude and decibels.

Their first single, the self financed 'I Want the Blood of a Civil Servant', earned them a publishing and distribution contract. By the end, the band saw it as somewhat tinny and corny - but were obliged to play it at every gig.

Clint Boon - later of Inspiral Carpets - engineered several demo sessions at The Mill in Ashton and drove their van to their one and only Radio One session. He told them he'd done it because '... he'd be back there soon with his own band...'. And he was right. Later he denied in the NME that he'd even heard of The Monkey Run - and who'd blame him?

For a brief moment, The Monkey Run flirted with the big time. Support slots at landmark Manchester shows with both The Chameleons and The Stone Roses pushed them, blinking, into the spotlight. They also played live with The Wedding Present who helped them piece together a deal with a major distributor. Dave Fielding worked with them in the studio - producing juggernaut second single Falling Upstairs plus It Makes Me Happy and the Evil Deceiver (he was 'helped' on the latter by an ex-member of `Thin Lizzy. Don't ask it's a long, strange story...).

Falling Upstairs was well-received - mainstream press reviews hailing it as the best-produced independent single of its time. And, months later, it re-appeared - repackaged together with the first single as the 'Waiting for a 409' EP. It was very popular in Germany, danke very much.

And then? Well, nothing.

The follow-up to '409' ('Big Love Thing') was pulled at the last minute as distributor Red Rhino channelled all of its resource into getting The Wedding Present a major deal. The band retreated to the studio to reshape and redefine its sound and by 1989 an new elite of Manchester Bands were deemed hip, and snapped up in a major label feeding frenzy. The Monkey Run were perceived as 'old-timers' - though, in reality, they were much younger (and probably more naive) than their contemporaries.

Indeed, The Monkey Run weren't very rock 'n roll. They played with a smile on their faces and their drug of choice was builders strength tea, two sugars, thanks. And they never really sat comfortably in a pigeonhole. In one interview they were each asked who they wanted the band to sound like. Mark said Crass crossed with the Chameleons; Jim said pre-pop Adam & the Antz over laid with the Smiths; Terry said Hawkwind with a dash of the Moody Blues. Craig said The Housemartins - though he did have a Lloyd Cole haircut and a polo-neck jumper.

Confused? That might have been the plan. If only they had a plan.

So, in 1989, the band brought their friends, fans and supporters together for one last time, played a barnstorming set (in the heaving metropolis that is Todmorden) and went their separate ways.

It's hard to believe that it's 20 years ago. Can two decades really pass in such a hasty blur?

Yes, probably. But long before the Smiths, the Stone Roses, Inspiral Carpets, Happy Mondays and even Oasis, The Monkey Run were making original, passionate music. Without compromise and with their hearts on their sleeve. And that alone is reason enough to celebrate them.

amberlight Says –
Connections eh? I picked up The Last Mad Surge of Youth in Waterstones today and here he is.
If you'd like to leave a comment, please Login. Login
Manchester Digital Music Archive is licensed under an
Attribution-NonCommercial-ShareAlike 4.0 International License.
Charity no. 1164179
Our archive currently contains 3690 Bands, 734 DJs, 1353 Venues, 234 Industry Professionals and 22478 artefacts contributed by 3665 members.