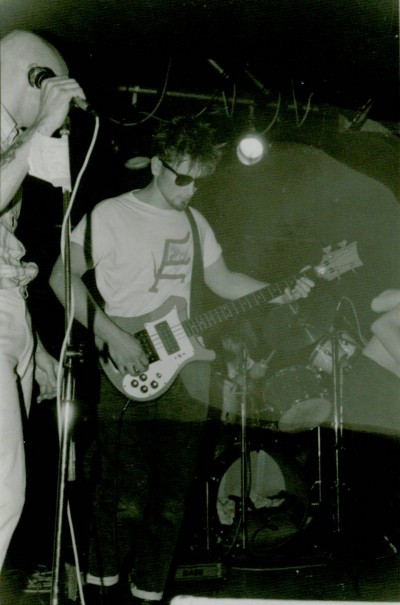 Raw ECT play the Hacienda "Hometown Gig" 1984 possibly 2nd October or 20th November. (Rob (skin'ead) - backing vocals and pre-Bez/ pre Cressa slightly surplus mascotic onstage presence (left), Phil Morris (Bass and preteniously symbolic T-shirt (right). The Hometown Gig was a kind of Factory "battle of the bands" and in true Factory style, a complete fix. Karl Burns (of the Fall etc) was a mate of skinhead Rob and being part of the furniture at the Hacienda at that time, fixed it for us to win! I believe Tony Wilson did the same for the Happy Mondays on a similar night. IKON video used to film all the gigs and we did have a copy of this one, but its been lost somewhere along the way - anyone out there with a copy let me know!
Rob did for menacing stares what Bez later did for Freaky Dancing.
Artefact added : 9th September 2009
by bornred