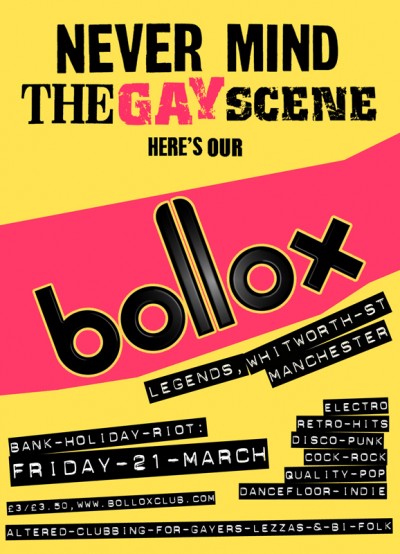 The original Sex Pistols-styled poster that coincided with the launch of the alt.queer club night Bollox. 'The name Bollox was in reference to the gay scene ‘bollox to the gay scene’ - not male genitalia!', says DJ and promoter Rod Connolly.

Rod is a great DJ who defies expectations by playing a wide range of indie, rock and pop. Bollox is now hugely successful monthly party based on the idea that not all gay people want to hear handbag house and chart pop all night. He does throw in some Kylie and Madonna bombs, etc, but these will be nestling in amongst riot grrrrl, grunge, indie and electroclash gear. Zoe from the all-girl trio Hooker is Bollox's other resident DJ, and is well-known for picking out lost pop gems and looking gorgeous whilst she's doing it.