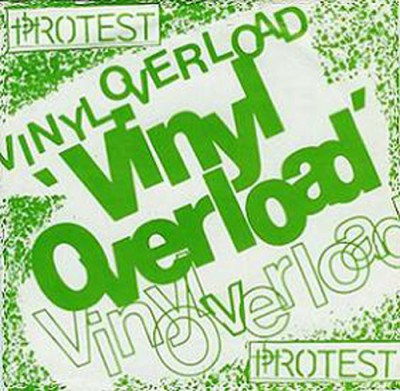 7" EP "Vinyl Overload" Recorded at Cargo in Rochdale.
Band Members: Phil Riley, Sacky (Michael Saxon), Si Taylor, Mick Stuart.
Protest formed at the end of 1980 and fizzled out in early 1984. Played many North West venues and regularly at The Mayflower with bands The Exploited, Angelic Upstarts, Blitz, The 4 Skins, Infa Riot to mention a few. Featured on about half a dozen compilation albums produced by No Future Records, Excentric Noise, Crass Records etc.
Artefact added : 10th October 2009
by philriley427

davec Says –
Hi Abdom,Sacky used to be an old mate of mine going back to when we were kids.Whatever happened to him?LastI knew he had a kid and was living in town ,heard later something about about going off to Spain

davec Says –
Didn`t read the name ,thaught it was a comment from Abdom.Like you said,Sacky just seemed to disappear.

philriley427 Says –
Hiya Gally, ...long time, eh?
Thanks for asking. I'm not too bad for an old fart. I live on the edge of the Pennines now, in West Yorkshire.
I still have my old Tama kit, but haven't played it for some 12 years. However, I do have an electronic kit set up in the corner of my living room which I play on, every now and then.
I still get into Manchester quite a lot and go watching local bands quite often, around Oldham, Ashton and over near where I live.
The Glent was great wasn't it? I see it's up for sale again. Should go for a look around as a potential buyer. I think it'll be a bit too 'modernised' for my liking.
What's with you nowadays?

johng Says –
hiya phil,good to hear from ya,saw your mum a while back and she said you were living over there.
the protest record is probabley worth a few quid on ebay these days like a lot of those old punk records are.
Been passed the Glent a few times recently,believe they want a quarter of a million for it!!!they have also now started to build another house right next to it on the old garden between glent house and the old buckley place.
doesnt look the same since they sand blasted it,made it lose its character i reckon,looked great when it was almost completely black ,reminded me of the house Norman Bates lived in with his mum in the film 'pyscho'!
living down in Hulme still-well the 'new' Hulme,you wouldnt recognise the place these days.
go to gigs in town very occassionally,always makes me feel old being in venues full of young punks.
hope your all good.get banging them skins!!

fit for heroes Says –
hi phil, great to see someone still cherishes this era!! nice work.
just to fill in one of the spaces.
Sacky did go to Spain in `88 and stayed there until he went to Germany in `92. First working as a butcher, then trained and worked as a plumber and central heating installer and since 2006 as a pipe fitter for ships engines. not been active in the music scene himself, but his wife has a couple of jazz bands and a soul/disco/cover band which is quite well known in bavaria. If you are interested homepage is www.tentoeleven.de .Does do the mixing desk for them by smaller/private concerts, but for the big ones theres always a profi provided.
Unfortunately rarely in GB/Manchester. only every 2 years or so.
Can you remember Mike Joyce from The Hoax. They played at the Exploited concert as well. Used to see him often in Manchester. One day on King St. he told me he`d got a new band and invited me to see them in the Hacienda. It turned out to be the Smiths. Somewhere I read that later he`d been playing drums for the Buzzcocks.

That`s all for now.SAy Hello to anyone who still knows me and thanks for the good article.

philriley427 Says –
Hello "fit for heroes". You didn't say who you are. Your forum name doesn't have anything to do with the compilation album of the same name does it? Which incidentally, featured Protest's first ever recording. (Pretty poor it was too!).
Thanks for the info. Yeh, I remember Mike Joyce and The Hoax. There's allsorts of bits and pieces about them on this site.

Gnash Says –
I knew Sacky back then he was a lovely lad I used to shave his Mohican. I was lucky enough to get hold of a copy of the record recently for a few quid.

chris structure Says –
Hi Chris Connelly here, i am writing a book about Cargo Studios and all the bands who recorded there, I would appreciate if Phil could contact me at chrisdiconnelly@sky.com
Thanks

Great company, great music, great atmosphere and it's FREE to get in!!! - edit
If you'd like to leave a comment, please Login. Login
Manchester Digital Music Archive is licensed under an
Attribution-NonCommercial-ShareAlike 4.0 International License.
Charity no. 1164179
Our archive currently contains 3831 Bands, 752 DJs, 1454 Venues, 303 Industry Professionals and 29438 artefacts contributed by 3984 members.