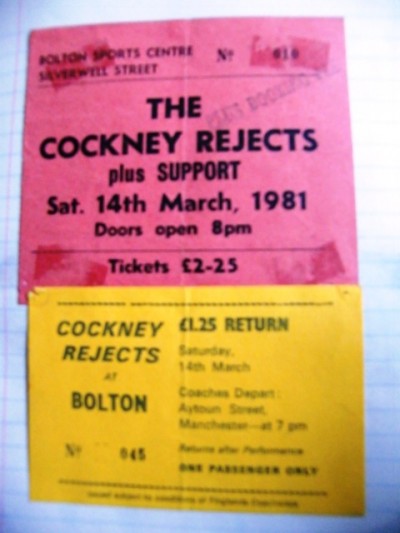 BrendanJabbers Says –
Wow, was it really 29 years ago? I was at this as well - I was a police officer in Bolton at the time and had been working a Wanderers match in the afternoon. On my way up from Burnden Park I called in in uniform while they were soundchecking. They made me very welcome - they were good guys. Also saw The Buzzcocks and The Fall during this brief season of concerts at this venue. I remember sitting on the floor in the bar with a load of others when a colleague of mine, an old Inspector, came in on a routine visit and scowled around at everybody. Some kids next to me were bricking it, but when he left one said "Huh! He was taking his life coming in here, wasn't he?"

GaryMHough Says –
I was singing flares and slippers with the band at this gig - remember it well. The Buzzcocks, fall and Upstarts gigs I recall too. Great days but not as good as seeing the 1976, 1977 bands in Manchester.

tattoo100 Says –
i think i remember you brendanjabbers
If you'd like to leave a comment, please Login. Login
Manchester Digital Music Archive is licensed under an
Attribution-NonCommercial-ShareAlike 4.0 International License.
Charity no. 1164179
Our archive currently contains 3861 Bands, 758 DJs, 1458 Venues, 316 Industry Professionals and 29644 artefacts contributed by 4033 members.