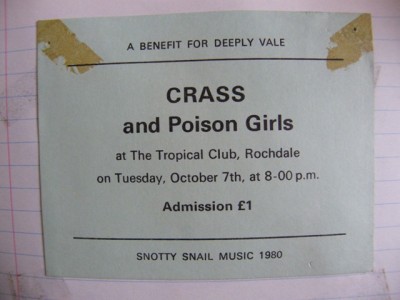 Crass. Supported by Poison Girls. 7th October 1980.Tropical Club.Rochdale.
Weird venue but brilliant gig. The Tropical club was basically a house which was being run as(I think) a rasta club. The gig was upstairs and you could feel the floorboards springing under your feet. The stage was tiny and they were playing mad Crass videos on a tv on a shelf.
At the bottom of the ticket it says Snotty Snail Music..so I presume Not Sensibles may have had something to do with the organising
Artefact added : 11th October 2009
by woodsman

ozit Says –
I started rock gigs at the Tropical Club by agreement with the West Indian owner Chester in 1978- it was up an alleyway on Oldham Road Rochdale just up from the junction with Drake St and just up from Tractor Music/Cargo/Suite Sixteen .It was upstairs above a carpet shop and was a real dive but had a great feel.

darkhorse Says –
just to give a flavour of the times , crass who always denied their pistols influence [ ridiculous seeing as it was the very genesis of their existance ] interrupted their crass tv display that night to show on screen a photo of rotten in a sheepskin coat being broadcasted live by news at ten as he was being commited to mountjoy prison for fighting . says it all really . i doubt he ever thought of showing a photo of them to anyone
If you'd like to leave a comment, please Login. Login
Manchester Digital Music Archive is licensed under an
Attribution-NonCommercial-ShareAlike 4.0 International License.
Charity no. 1164179
Our archive currently contains 3734 Bands, 739 DJs, 1424 Venues, 261 Industry Professionals and 27921 artefacts contributed by 3859 members.