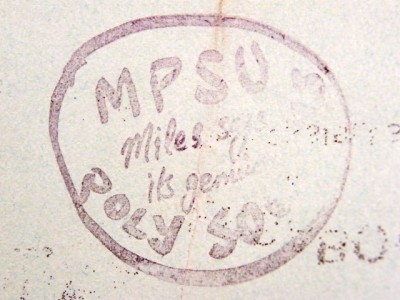 This is the very technical stamp on the back of tickets to stop any dodgy forgeries!!! Considering the entrance prices were between £1 to £1.65 you have to wonder was it worth getting the stamp made!!
The bit in the middle says,"Miles says its genuine". Dont know who Miles is!! Anybody??
Artefact added : 13th October 2009
by woodsman

philriley427 Says –
Heyyy... that's the one! Just how I remembered it. Cheers.

philriley427 Says –
Hey Abdom. I think it was there I first met you and Tish (around 1978). I think Dave (can't remember his second name), a good friend of Simi's, was there too. The Mekons were playing and they were supported by a band, I think they were called 'Ralph and the Ponytails'. Or is my confused brain just making things up?
(I'm still trying to find some old photos, by the way).

woodsman Says –
Ha ha nice 1 mate!!True about prices..gig, packet of fags, beers, bus home(to Oldham)....prob about £7. Happy days!!! Glad to give good memories, this site is bringing me many!!!

abdom Says –
That's me, Fame at last!!!!
Hey Phil I don't remember Ralf and the Ponytails but Simmi's mate was called Dave Sweeney, we used to call him "Sweeney". I have picture of him in the Kings head I will send it to you.

dj Says –
Went to the Apocalypse Now tour at the Poly 1.7.81. I cant remember too much about it apart from buying a crappy t shirt with all the groups names stenciled on it. Can anyone put a date to a couple of gigs i went to. At the Appollo, GBH, Abrasive wheels and Blitz, a good gig but a bit empty.The Exploited at the Gallery, this was one of the hotest gigs i ever went to. I remember lying outside steaming on the pavement as they played the encore of the Pistols Belsen was a gas. 81-82?

damined Says –
I know £1.65 doesn't sound a lot but back then!
I....er..had a mate who's older brother got a 'Scotch Copier' (one of the first commercial copiers available back then) and he printed off 'a few' black and white tickets for Killing Joke and sold them outside....(all the serial numbers on the back were the same) made a fortune....about a tenner!

Treble99 Says –
I too went to the Apocalypse Now tour at the Poly and if i remeber correctly there was UK Subs, Discharge and Chron Gen on the bill and maybe Anti Pasti as well. I was also at the GBH show at the Apollo and my ticket stub has the date Sat 23rd Oct 1982, i cant help you with the Exploited date though.

mitch Says –
I'm with Woodman on this. I'd worked with all of these at the Mayflower and throughly appreciated a night off by having a gig when I could just concentrate on enjoying the bands and their music. It did worry me that this was a step into the mainstream but apart from Exploited on TOTP it never materialised.

dj Says –
I think the Exploited were the only group to fall in the charts after they appeared on TOTP with Dead Cities!!

anniejo Says –
These comments were a while ago, but I've just discovered the site. Miles Newby was the social sec, also my boyfriend and I was social sec 2 years later , loads of the tickets shown were bands I booked. Amazing stuff!!

Toony Says –
Miles signed me up as DJ when he started as social sec and I was still ther when you took over JO. Good times

anniejo Says –
Steve Toon!!!! Wow, i remember you! How's things? God that was a long time ago. I came back to Manchester a few months ago and did a bit of a memory lane thing then found this site, amazing that people still have all this stuff. Got an album of yours, has your name on anyway.
If you'd like to leave a comment, please Login. Login
Manchester Digital Music Archive is licensed under an
Attribution-NonCommercial-ShareAlike 4.0 International License.
Charity no. 1164179
Our archive currently contains 3734 Bands, 739 DJs, 1424 Venues, 261 Industry Professionals and 27921 artefacts contributed by 3859 members.