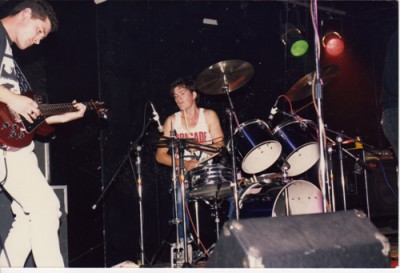 abdom Says –
Hey Phil my brain is only running at 50% at the moment but wasn't Gary Crane a relation of the late Rob Crane?

philriley427 Says –
Yep, His younger brother. And ,his youngest brother was Martin.
Used to crash on the sofa at their home in Burnage quite often, to save traveling back to Stalybridge after a night out.

Flannel Says –
Hi Phil ! My memory's terrible but I do remember a gig at The Trap in Glossop, one at a tacky disco in the centre of town (whose name I can't remember) and turning up to support Gang Of Four at the Carousel club only to be told they'd double booked ? Nice that you've kept stuff, I've got naff all, not even my hand painted Hoax T shirt ! :-[

philriley427 Says –
Heyyy Flannel long time... how's things?
God, I forgot about the gig at The Trap. It must have been a bad one!
I think the club in town you're referring to is The Manhattan in Spring Gardens. Only a small place. We played there a couple of times. A week after we did our last gig there, it was demolished and turned into a 9 space car park. Also in the audience that night was Mick Hucknall (early days of Simply Red).
The Gang of Four gig was a case of their manager demanding we paid his engineer and for the use of their PA. We refused and decided to go and get pissed at some club instead. But before we did, we hung around outside for a while, most of the people who'd turned up decided not to go in. They lost most of their audience that night.
I used to have loads of stuff, but it's disappeared over the years. However, I spoke to Simi, just a couple of days ago, we're gonna meet up some time next week. He's got loads of memorabilia and most of our recordings burned to CD.
I recall seeing you play a few times too. A much better drummer than I! Do you still play? I do, but it's just on an electronic kit in my living room.
I still have a couple of Hoax records. I remember one night at the Mayflower, Mike Joyce telling me he was leaving the band. It was the last I saw of him until he reappeared in The Smiths. Didn't he used to go out with your Louise?
Abdom sent me some pics last week. I'm pretty sure, amongst them was a shot of one of your lovely sisters, sat with Plumb.

Flannel Says –
Hee hee Plumb was a hero when he dived in to help me out during a big fracas at The Birch one night with a bunch of numpties who basically came in to cause aggro, he slipped on the wet floor and broke his leg ! Oops. Yes the Trap gig was poor, and the Manhattan was a glitterball disco but there were so few places to play, and no I wasn't a good drummer, just keen ! :-] I remember taking imported punk records down to the Mayflower to get Muppet to play 'em, with Steve Cooper who was my 'ticket' in there (I was only fourteen at the time),as you may know he died some years ago. I also remember kipping in your garden shed after a gig late one night (unbeknowns to you I think !) , Aky too, taxis were a luxury and buses non existant.Anyway babbling on now, nice to hear from you Phil.

philriley427 Says –
Just spotted the actual date when this shot was taken, on a Boardwalk billing list recently posted on this website:
Sunday 3rd August, 1986.

philriley427 Says –
Gonna meet up with Gary Crane in a couple of weeks.