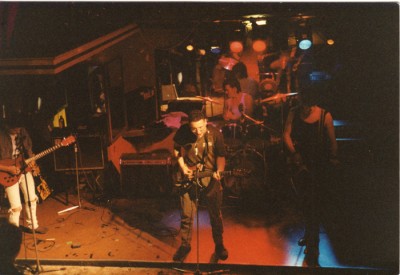 brushuk Says –
i used to do sound at the gallery 89/90..
also played there a few times with;
David Cairo, National Pastime, Rhythm Party, and some more makeshift outfits whose names i can't recall!! good days....

johng Says –
HI phil-didnt the band your nick and andy played in,Hysteretix support you at a gig at the gallery?or am i getting confused in middle age?i do remember seeing em play there but not sure if it was as a support with brigade.be interesting if there were photos of that as well,ive lost most of my old photos over the years.

philriley427 Says –
Come to think of it, they did. It could well have been on the same night as this. I know a band called Iota supported us on this billing and I think Hysteretix might have been on before them.

johng Says –
saw pebble a few times of late,guitarist with support band Hysteretix,he's given me a flyer for this gig that i will try and upload at some point soon,also supporting were a band called 'Blake Bros.
also the DJ that night was a guy called Steve Toon.
Friday 25th April 1985-£2 on the door.
also bumped into one of the ex Brigade at uk subs gig at the witchwood last week,sorry fella forgot your name,Stalybridge Celtic til i die!!
do you have any pics of hysteretix playing this gig phil?

philriley427 Says –
I'm guessing you bumped into Simi. I've bumped into him a couple of times at The Guzzlin' Goose round the corner from there.

Sorry John, I have no phtos of them.
If you'd like to leave a comment, please Login. Login
Manchester Digital Music Archive is licensed under an
Attribution-NonCommercial-ShareAlike 4.0 International License.
Charity no. 1164179
Our archive currently contains 3861 Bands, 758 DJs, 1458 Venues, 316 Industry Professionals and 29644 artefacts contributed by 4033 members.