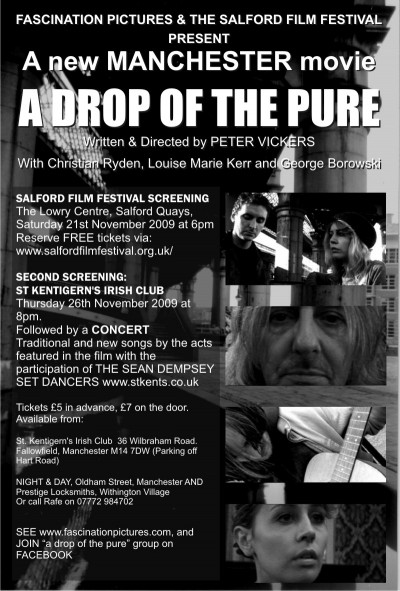 A DROP OF THE PURE

Every man has a song in his heart, so what do you do when someone else is singing yours?

A DROP OF THE PURE is about a Manchester lad who sets up a Folk Night above a pub, then must fight to save it from closing.

A DROP OF THE PURE is a comic drama set in present day Manchester, London and Barcelona. It’s about JIMMY, a 29 year old Manchester lad, who’s fed up with chasing pop success in London and so returns home to set up an acoustic night above a pub. He wants to get his soul back and get his girlfriend, EILISH, back . But then his old band mate, CALLUM, arrives - to steal his girl? To steal his songs? The locals, who usually fill the night, have abandoned him to watch footy on the screens down the road and there’s a bloke from the brewery coming in to decide the pub’s future. Jimmy may end up as “Anonymous” as the forgotten songwriters whose music fills his night.

A DROP OF THE PURE celebrates the heart and soul of a disappearing community – with gags and guitars.

SECOND SCREENING:
ST KENTIGERN'S IRISH CLUB
Thursday 26th November 2009 at 8pm.
Followed by a CONCERT
Traditional and new songs by the acts featured in the film with the participation of THE SEAN DEMPSEY SET DANCERS www.stkents.co.uk

Tickets £5 in advance, £7 on the door. Available from: