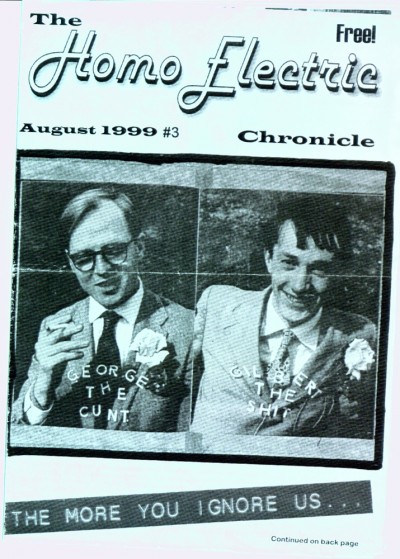 Issue #3 of the Homo Electric Chronicle. I remember this period of time very clearly. There's list of records on the inside that includes Dub Tribe Sound System 'Equatorial' and and Isolee 'Beau Mot Plage' - two colossal bombs by anyone's standards!

On the back is a brilliant anti-Mardi Gras diatribe by The Divine David. After spending an hour trying to work out out how to scan this item and then turn into text, I've had to content myself with uploading it to Divshare for your enjoyment.

sbilts Says –
I had always wondered what their surnames were...

Bigmouth Says –
I checked out the back of this and it says that will be a Homoelectric at a Secret Party Location on that Mardi Gras Weekend. Can't remember where that was, any ideas? I would have played at it, but have no recollection, so it must have been good. Around this time Electriks were doing lots of illegal parties in some ace spaces under the moniker 'Electric Souls"
I think the Mardi Gras diatribe is bob on, still. Check out the divshare link. I think the bars are fleecing the public and not handing enough cash over to charity. But that is just my opinion...
If you'd like to leave a comment, please Login. Login
Manchester Digital Music Archive is licensed under an
Attribution-NonCommercial-ShareAlike 4.0 International License.
Charity no. 1164179
Our archive currently contains 3873 Bands, 759 DJs, 1464 Venues, 323 Industry Professionals and 29805 artefacts contributed by 4067 members.