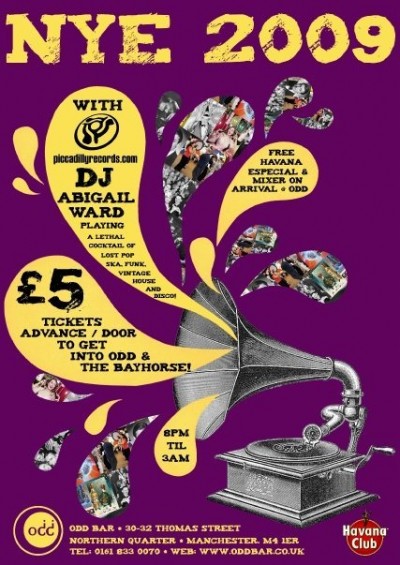 Flyer from New Year's Eve at Odd Bar. It was a slightly strange night. We sold out all the tickets, but it didn't feel that busy compared with a normal Saturday. The whole of the Northern Quarter seemed eerily quiet to me.

Free rum and ginger cocktails were on offer to the staff. I usually drink moderately whilst DJing, but the words 'free' and 'unlimited' are dangerous, I find.

I had long before decided that my midnight record would be 'Can You Feel It?' by The Jacksons. I wanted to play a Jacko tune, and in my head I could hear that amazing intro belting out after the obligatory Big Ben chimes.

However, due to my levels of 'refreshment' as the midnight hour rolled around, I allowed my Mp3 player to run on by accident after the bongs (which according to one disgruntled punter were 'five minutes early').

The tune that just happened to follow, (on shuffle, might I add) was Cheryl Cole's 'Fight For Your Love'. The girls behind the bar went wild, whilst I repaired, cursing, to the lavatory.

Of course, it could have been worse. There's plenty of Throbbing Gristle on my player, or Monro Stahr, or Leonard Cohen. But still...

James Zeiter did a rare vinyl-only set (at my insistence), which included ACR's '27 Forever' (Jon Da Silva Soundstation Fix Mix) and, of course 'Vogue' (Bette Davis Dub). During the latter, there was a lot of clambering on furniture and general mayhem, mainly instigated by the bar staff.

After finishing up at Odd, I went to Cord briefly to hear Johnny Abstract bang out some old acid, and then on to El Diablo's, where I was moved to dance on the stage next to a hugely non-plussed DJ Neil Scott.

The following day, I enjoyed my third worst hangover of the last decade. I'm still spotting vomit stains on the carpet to this day.
Artefact added : 12th January 2010
by Abigail 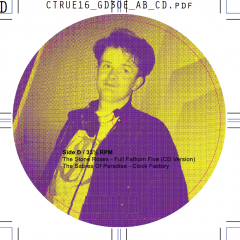 JK1 Says –
I love that shuffle function!
Does all the work for 'ya..

Abigail Says –
This is why I stick mainly to vinyl! Best format for cackhands like me!
If you'd like to leave a comment, please Login. Login
Manchester Digital Music Archive is licensed under an
Attribution-NonCommercial-ShareAlike 4.0 International License.
Charity no. 1164179
Our archive currently contains 3734 Bands, 739 DJs, 1424 Venues, 261 Industry Professionals and 27932 artefacts contributed by 3861 members.