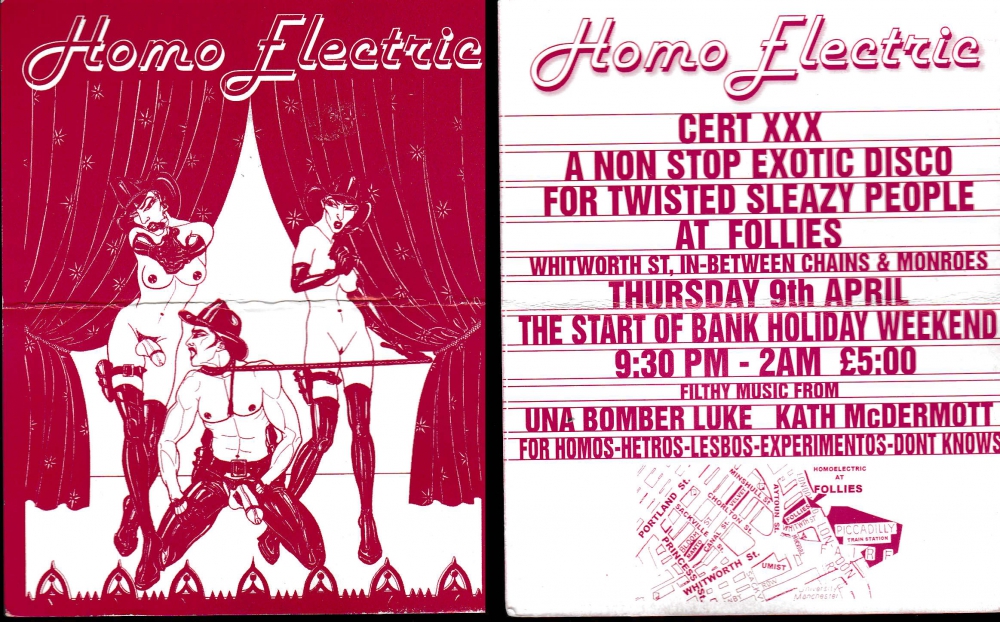 This is the flyer for the second Homoelectric in 1998. It was a bit of a leap of faith that rewarded us with many years of brilliantly twisted parties. I was an 'Electric Chair' regular, having grown tired of Canal St and its Muscle Marys, incessant cheesy music and hen nights galore. I really enjoyed hearing a truly eclectic mix of music at the 'Chair' and liked the open-minded nature of the crowd.

When Luke asked me to become a resident at this new night, I wasn't sure if it had legs, but thought we should give it a go.

Ryan Minchin had been developing an ethos that he thought the night should stand for which really grabbed me. He later expanded on his views in the the Homoelectric Chronicle fanzine, which was always worth a read. Much of it was against the uniformity and conformity of the gay scene at that time. He wanted to gather all the misfits and outsiders who had become marginalised on the increasingly commercialised and mainstream gay scene and take the party underground. Homoelectric would be a place for all open-minded, free-thinking folk, regardless of who they had sex with (homos, heteros, lesbos, don't knows) to dance to quality music that wasn't being played elsewhere on the scene. Bingo!

It seemed to work.

I took my Mum to the first one and it was great, despite a brush with the law on the way home! I remember playing Norma Jean Bell and Blondie and being surprised by how many nice people came out on a Thursday.

This brilliant flyer designed by the lovely Paula McNamara was perfect for the night.