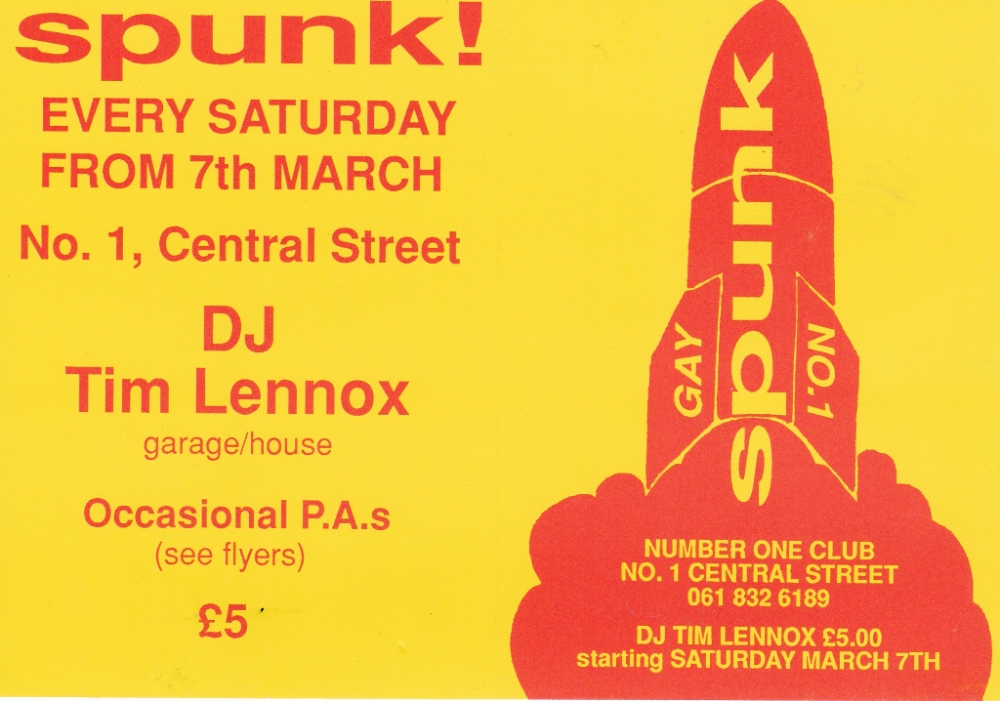 "Number 1 Club Spunk flyer. This was our relaunch for Saturday nights. We wanted to get back to a gayer audience as the atmosphere was getting too edgy so we thought we were really clever with our spunk 'rocket'... and in fact even built an 8ft rocket prop for the middle of the stage."

”When I first started going to the Number One it wasn’t that busy, vases of flowers adorned the tables. It was a carpet andchrome joint but the music was new and cool, which meant the crowd was young, and rather excitingly for the time – mixed. Saturday nights became increasingly busy, messy and unmissable. Tim Lennox played every single week to an ever-growing and adoring crowd of reprobates: rent boys, straight girls, queens, scallies, dykes and dealers.

We all congregated in a heaving, sweaty basement to hear a phenomenal blend of house, disco, garage and rave on a heavy quadraphonic system with kick-ass lights in a fog of dry-ice and euphoria. It was hot down there. Us girls would take our baggy t-shirts off and dance all night in our bra-tops, nobody would mither us or even bat an eyelid. Number One was about top mates, piano breakdowns, hands-in-the-air, bass-lines, sweat, freaky dancing, daft convo’s on the back stairs, smiles as big as buses, hugs (lots of hugs) and Tim. Tim was the reason I started DJing and was a huge influence. When I ended up playing alongside him at Flesh at the Hacienda, I got a real kick out of it. There are too many ridiculous stories about the Number One for me to tell!”