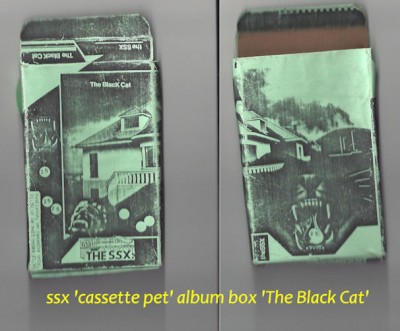 the ssx were a heaton moor group formed by three people who were involved in running Radio Brain , which was a pretty out there dub scratch pirate radio which transmitted a show from the penines alongside Andromeda independant radio, another pirate for a while in the 80's . They were on a sun night after dark for a few hours. The shows ran I think sparodically in winter 82/spring 83, but didnt last for long as all their equipment was taken in a raid from the home office one night.
In the summer of 84 The SSX had a very small very local success in the stockport area with their cassette album the Black Cat thanks to constant playing by Steve Toon on the pirate radio KFM.
There was a comraderie between the group and Steve Toon as they were all from a pirate background. two of the SSx were D.J's and one was a musician, a guitarist singer. they did a sort of psychedelic punk scratch dub thing using low tech samples stolen from new order records on very cheap equipment. the group broke up in 85.
Artefact added : 10th March 2010
by circle alcove