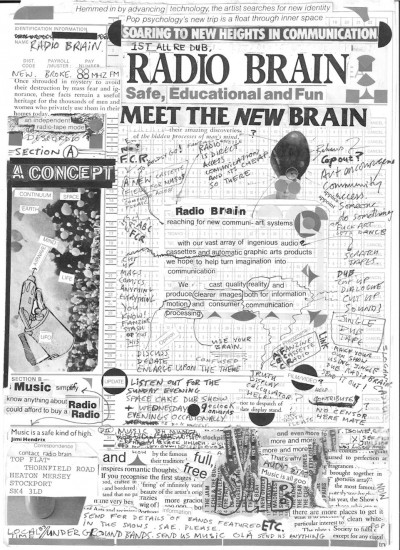 this is a poster for Radio Brain which was very small dub radio running on less than a shie string from a flat in Heaton Moor, winter 82/spring 83
Dr Gaz one of the D.Js went on to form the SSX with two other member of the Pirate., the SSX whose first release was a cassette pet called Transmitter were later to be put on heavy rotation by Steve Toon of KFM, another local Pirate station.
Radio Brain ran a very chaotic show on Sun Evenings called the Space cake dub show. A highlite show was a transmission of spoof E.T. landing news announcements put together from snippets of 50's sci- fi films. The shows were all heavily dubbed on a roland space echo and cheap and nasty boss guitar effects. local people and friends were invited to contribute any records they liked to be given the treatment.
reggae did feature heavily but all genres of music were welcomed and all recieved the Dub.
The shows were transmitted by taking all the equipment :a pre recorded show on cassette tapes, a cassette player (the sony walkman was new technology then) and a very big Fm recieving ariel, and a powerful transmitter (transmitter was curtesy of Andomeda independant radio, an established pirate.) up onto the penines.
They could be picked up all over the manchester area, although not many people knew they were there as they fell down heavily on promotion, and carried no adverts so created no income from their antics..
All the equipment was confiscated in 1983 in a raid by the home office, and Radio Brain went off the air. All the tapes were soon lost as they were all on BASF 120 min. chrome cassettes which lasted about 3 plays before mangling and dying.
local bands did get played on the shows but it was hard to tell as over the top effects were laced over everything.
Artefact added : 10th March 2010
by circle alcove