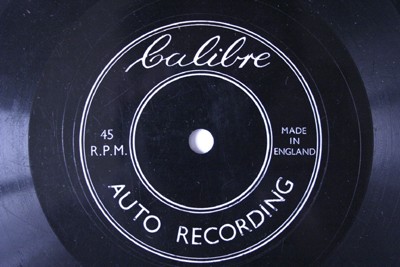 Here is an acetate disc from the recording booth that used to be at Belle Vue Zoo.

You could go into the booth, record your own song and get an instant record....! Mostly, laughing, children's folk and more laughing. The best ones feature fights and arguments.
I have a few of these as I have been collecting them over the years, this one featured has a group of girls singing until some boys jump in and start shouting.

Not too sure of the time period, I would guess 50s to 70s. They are acetates so dont play them too often if you find one. They will wear out.
Artefact added : 23rd September 2020
by Abigail

isweariwasthere Says –
My brother & sisters used to record in those booths,Mid 60s,The discs were about 6inches diameter as opposed to the normal 7",Distinctly remember my brother squeezing in the booth with a jumbo acoustic,The booth I remember was located in Lewis's Piccadilly.

tenchahoy Says –
HELP PLEASE!!! I am trying to archive these recordings as a CD. If anyone out there has one I would be grateful of a loan, simply to record it onto CD. With the release of the CD we also aim to host a one off launch event featuring recollections of the people who recorded them. Brian

Frank Torr Says –
These things were usually recorded when people were leaving the Elizabethan Ballroom on a Saturday or the Top Ten Club on a Sunday. I think that certain conditions had to be met before you could use them:
1. You had to be drunk, and preferably at the point of vomiting (if the smell of the booth was anything to go by)
2. You had to have absolutely no talent.
3. If you got too giddy and needed a wee, you had to do it in the booth (if the smell was anything to go by)
4. There was to be no snogging in the booth, as this was unfair to anyone who wanted to be sick or was in need of a wee.

I never thought that I would see any reference to these things again, certainly not in the context of somebody wanting to archive them. I have some in my loft that were made around 1966. I have no idea what is on them but if you let me know where to send them, I will be happy to do so.

tenchahoy Says –
Hi Frank,
Where the booths really that bad!!! A lot of them sound like drunks to be honest. Thanks for the info, if you could let me loan them I would be really grateful. I can pick them up if its easier.

Balzo Says –
I have just transferred a disc to digital from 1948 that my mother made aged 9 in a recording booth at Belle Vue Manchester. On it she sings On the banks of the Wabash and Now is the Hour. I have a photo of the disc which is really interesting but I can't see where to attach it here. She is now 77 and still singing!
If you'd like to leave a comment, please Login. Login
Manchester Digital Music Archive is licensed under an
Attribution-NonCommercial-ShareAlike 4.0 International License.
Charity no. 1164179
Our archive currently contains 3869 Bands, 758 DJs, 1460 Venues, 323 Industry Professionals and 29710 artefacts contributed by 4047 members.