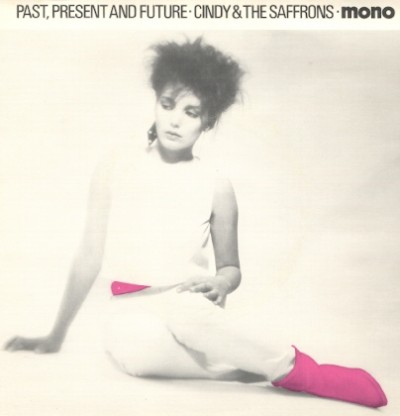 When I bought this single from Beatin' Rhythm last year, I had never heard of Cindy & The Saffrons and certainly had no idea who "Cindy" was but I love the teen drama of the Shangri Las' original version of Past Present and Future.

Any ideas who "Cindy" could be? She grew up in Stockport and on TV she played Nurse Mills in the Singing Detective. Her films include Willow and Scandal and she was also married to Val Kilmer.

While Joanne's vocals are nothing like Mary Weiss this is still a pretty good version. ABBA's Agnetha Faltskog has also recorded this song as well. Keyboards are by Anne Dudley (Art of Noise) whose string arrangements include ABC's Lexicon of Love and Getting Away With It by Electronic. Past, Present and Future was written by Morton, Leiber and Butler and based on Beethoven's Moonlight Sonata. This version is produced by Stiletto and recorded at Abbey Road in September 1982. The B side is Nothing Like This.