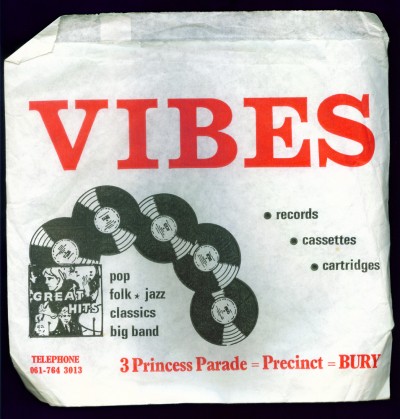 One of a number of 1970s record shop bags donated to the Archive by Ashley Kennerley. I love the designs and can't believe how many different shops there were around at that time.

If you have any recollections of any of these shops, get in touch at:

I hear Vibes is still going strong in Bury Precinct!

(I've guessed the year for this artefact.)

shadow Says –
Before Vibes there was Openshaw's Newsagents which had an adjoining record store, managed by Tony - by the time that Punk/New Wave was making itself known Tony had taken over, re-styled the shop (if I remember correctly, gave it a front door!) and re-named the shop Vibes!
1965 is a bit out with the date - we didn't have the Precinct in Bury till about 1972.
Vibes was renowned for Tony's willingness to stock or order obscure singles and LPs in those analogue days and even though I don't go back to Bury as often as I should the current crew seem to have kept up that philosophy.

Shaker1960 Says –
Agreed. Definitely not the mid 60s (the 061 prefix alone is a give-away there). I'd have put this at around 1976 at the earliest. Incidentally Vibes is still hanging in as one of the few independent record shops in the region (if not the country) and still have a policy of being able to order almost anything.

shauns Says –
I spent most Saturday mornings in the early to mid-eighties getting the 482 bus to Bury and buying a 7" single with my pocket money. They had the most fantastic selection of punk,new wave & indie records. They also had a 'sister' shop also in Bury called 'The Disc & Tape Exchange'. Seeing this bag has brought back a lot of happy memories.

Grim O'Grady Says –
I remember Vibes, that's where I got my copy of Never Mind The Bollocks from. & I also remember after reading in 1 of the music papers review about the new X-ray Spex single, 'the day the world turned dayglo' (on dayglo orange vinyl) being released I would leg it up to Vibes every dinner time from school to ask them if they'd got it in, it seemed to take weeks before they got it in, when I finally got it I took it in to the music classroom & played it loud, a privilege of being a 5th former! Also it was through Vibes that The Reducers record 'things go wrong' was released, the cover had the band outside the shop, if my memory serves me well?

Grim O'Grady Says –
Shauns, disc and tape exchange wasn't a sister of vibes, they were direct competition, but D&TE wasn't as punk & had a lot of 2nd hand shit but better than Javelin. There was also that stall on the inside market but that was a bit poxy too & Boots used to sell records. But obviously Vibes was the place to be seen in.

shauns Says –
Grim - no worries. Did Javelin then go on to become D & T exchange? (Was it on the same premises?)
I recall they used the same style price stickers and some Vibes staff ended up working in there, but gues they may have been poached... Thinking about it they seemed to be more of a rock & metal shop.
''Save Records'' on the indoor market wasn't spectacular but I did manage to get the re-press of ''Spiral Scratch'' from there. ''Save Records'' had an even smaller stall on Radcliffe Market once upon a time and one of my primary school teachers ran it, so I used to buy some stuff from there as well.

shadow Says –
From memory, Disc & Tape Exchange wasn't set up as a serious rival to Vibes as it only sold previously-owned items.
The Vibes team took it over a few years later in the 80s and gave it the name 'Muze' (I think?), selling more metal and rock than Vibes.

a langan Says –
save record is still going in the market hall bury.a very strange record shop,i have one of there bags at home will attempt to upload it soon

Madwoollyfan Says –
The sister shop to Vibes was "Muze", which was situated where BHS is now in Bury's Millgate precinct, and was run by Tony's son. Tony sadly died around twenty years ago, and his family moved to Canada iirc. The halcyon years for "Vibes" was between 1975 and 1985, the shop is still trading, but is a shadow of it's former self.
Tony reminded me very much in looks of Deep Purple's Jon Lord around 1970.

Grim O'Grady Says –
@ Shauns, Javelin was next door but 1, (I think) down from Timpsons shoe shop as you head down towards boots or the indoor market.

@ Madwooly, yes Tony was a throw-back to the early 70's rock star & had a bit of the whispering bob harris whisper when he spoke to you. Top bloke.

Shaker1960 Says –
Sad news; I was speaking to Vibes' owner Gordon Oakes in the pub the other night and he's had to close the shop. He was apparently losing too much money to even wait to see if Bury's HMV branch was going to be one that they're closing. If the latter does happen, it will leave a borough with a population of 185,000 without a record shop at all.

bingo.jesus Says –
I think Vibes opened in its own right around 1977. I started working for a major label in that year and remember getting a call from the office that a new account had opened, and to call in. Start of a great relationship with Tony, Yvonne, Paul, Gordon and the staff in there. Fantastic shop, run like clockwork, one of the best independents in the country, no doubt about that. Tony was a workaholic, there till all hours. Lovely guy, we had some great banter but he drove a hard bargain when it came to buying stuff. I still miss him.

Disc & Tape Exchange was at the other side of the precinct - they also had a shop in Accrington. No match for Vibes - the Bury shop was eventually taken over by Tony and traded as Muze.

Save Records was run by an ex-goalkeeper (hence "Save") they also had a stall on Rochdale market.

Shaker1960 Says –
It's also worth noting that Tony set up the Vibes label. If you check out 'The Reducers' under the 'Bands' index there are some artifacts there. The two 'mainstays' of The Reducers were vocalist Graham "Raggy" Holden (who was sadly killed in a road traffic accident some years ago near Johannesburg) and lead-guitarist Roy Tynan who now lives in the Hebden Bridge area.

Madwoollyfan Says –
Tony certainly seemed to do very well out of the business, he lived in a lovely huge stone mansion in Rossendale and drove a new Porsche 911 Turbo at the time, this would be around 1979 ish. The shop was always heaving with customers, especially on a Saturday afternoon, remember there was not a lot of mail order, other than places like Beano's and Cob records and certainly no internet downloading in those days...Video recorders had only been out about four years. I remember my brother bought one in 1977, it was a Ferguson VHS with WIRED remote control...£575.....about £2500 in today's money...Btw, Bury's Millgate precinct was built in 1972/3 and did not have any roof on it, with concrete flags for flooring...very different to how it looks now, although Boots is in the same place, I remember buying Physical Graffiti from there in 1975 upon it's release....lol!

Shaker1960 Says –
Interesting that you mention Cob Records there. Their Bangor shop (although that and the Porthmadog branch became separate entities a few years ago) closed its doors in April this year although proprietor Owen is still promoting the odd live concert.
If you'd like to leave a comment, please Login. Login
Manchester Digital Music Archive is licensed under an
Attribution-NonCommercial-ShareAlike 4.0 International License.
Charity no. 1164179
Our archive currently contains 3728 Bands, 739 DJs, 1410 Venues, 255 Industry Professionals and 27371 artefacts contributed by 3818 members.