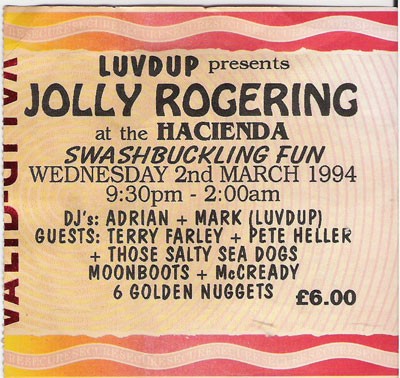 Not too many of these exist!

After a good run at The Paradise Factory, the Luv Dup Twins, Adrian (Gent) and Mark (Van Den Burg) were invited to move their latest night 'Jolly Roger' to the Hacienda. It was an unsuccessful move- the opening night was pretty empty (even with the ever popular Boy's Own Djs Terry Farley and Pete Heller as guests), the Hac not really having that hot and steamy atmosphere any more, an atmosphere that was crucial to a Luv Dup vibe.