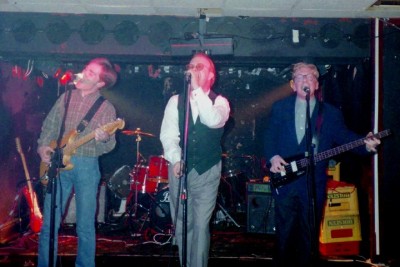 In 1995 Mike Finney and Steve Perrin briefly joined forces once again under The Distractions' banner. Mike takes up the story: "In 1995, Steve and me got together with Nick Garside (Manc producer), on bass, Bernard Van Den Berg (The Distractions after Alec Sidebottom left, then Secret Seven) on drums, Kevin Durkin (ex-Direct Hits, who we knew from TJM records at the beginning, and Escape Committee) on guitar (bass on Good Girls Don't Get To Paris) and played half a dozen gigs in and around Manchester and Liverpool."

"All the songs from the 1995 demos (www.thedistractio...) were in the set, with many other new songs, but only Still It Doesn't Ring and It Doesn't Bother Me from the old stuff. We were tempted to do Looking For A Ghost for an encore, but settled for Valerie and a few Lou Reed songs, which is in keeping with what we would have done originally. Good Girls Don't Get To Paris was written in 1979, but unrecorded until 1995 at Chiswick Reach (Joe Meek's Studio where Telstar and My Generation were recorded). The other four tunes were recorded at Manchester’s Out of the Blue Studio in 1995" (the original 'Madchester' studio, owned by Nick Garside).

granata Says –
Some of the tracks mentioned above that were recorded in Nick Garside's 'Out of the Blue' studio have been released by Occultation Recordings as the Black Velvelt EP available for digital download with a limited number of CD promos. See Occultation Recordings website (www.occultation.c...) for details of how to order, and keep an eye on www.thedistractio... for news of the forthcoming 12" single and CD album in 2011.
If you'd like to leave a comment, please Login. Login
Manchester Digital Music Archive is licensed under an
Attribution-NonCommercial-ShareAlike 4.0 International License.
Charity no. 1164179
Our archive currently contains 3608 Bands, 704 DJs, 1320 Venues, 218 Industry Professionals and 19559 artefacts contributed by 3530 members.