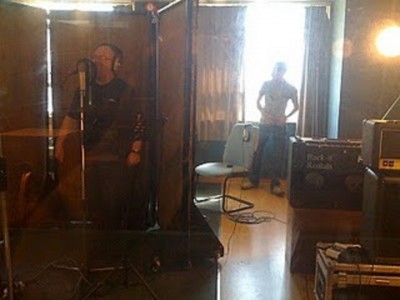 The first Distractions recording session for almost 30 years got underway at Parr Street Studios in Liverpool at 10 a.m. on Wednesday 16th June 2010. The goal was a new Distractions single which will come out on Occultation hopefully later this year and the line-up was:

Three songs were recorded, two written by Steve Perrin, a new one called "Lost" plus a completely revamped version of "Nicole", originally written for (and demoed by) his post-Distractions band The Escape Committee, plus "Oil Painting", written by Nick Halliwell of The Granite Shore. All three tracks were recorded live, without a click track and with Mike singing guide vocals, then minimal overdubs (including some fine piano and organ work by Richard Turvey of The Wild Swans) and vocals were added. Credit to Steve (New Zealand) and Nick Garside (USA) who went to great lengths to make this reunion possible. Mr Finney is in very, very fine voice... It really is great to have them back.

The Distractions - one of THE forgotten bands of Manchester, despite them being regular support for Joy Division, and releasing the classic FAC12 single, "Time Goes By So Slow" - are releasing new material for the first time in almost 30 years. Keep an eye out for the following new releases which will be out later in 2010 on Occultation (www.occultation.c...):

granata Says –
The Distractions are back with their 'Black Velvet' EP available for digital download with a limited number of CD promos. See Occultation Recordings website (www.occultation.c...) for details of how to order, and keep an eye on www.thedistractio... for news of the forthcoming 12" single and CD album in 2011.
If you'd like to leave a comment, please Login. Login
Manchester Digital Music Archive is licensed under an
Attribution-NonCommercial-ShareAlike 4.0 International License.
Charity no. 1164179
Our archive currently contains 3608 Bands, 704 DJs, 1320 Venues, 218 Industry Professionals and 19567 artefacts contributed by 3530 members.