Jay Spearman and the Javelins
Photograph
1961 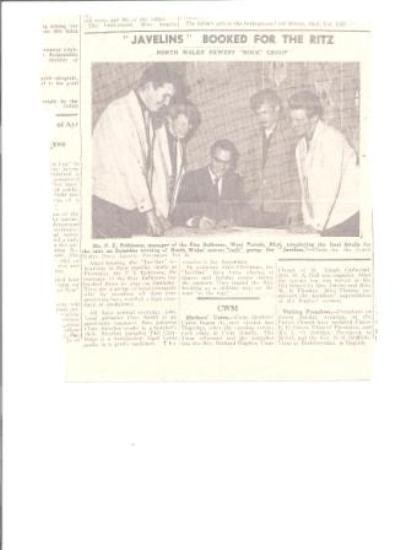 I was very surprised to see the Javelins listed on the web, as it's been 48 years since we played together. I wonder if Ron Williams, Phil Cartledge, Henry Wilson, Nigel Little, or Ron Clary (later of Deek Rivers and the Big Sound) are still around.

Chris Brooker has posted other pics on this site, and I just happened to have one of the early paper cuttings back from the days in Rhyl, N. Wales.

Chris & I played with Deek for a short time, but as he says, the bookings and transport were rather thin on the ground, so shortly after Chris left the group, I decided to return to N. Wales and finish up my apprenticeship.

I left the UK in 1972, emigrated to Canada, and then down into the USA in 1981. Now living in sunny New Mexico and enjoying the retirement.

E-mail me at PeterBarnes-Smith@q.com if you have any updates on the group's whereabouts.