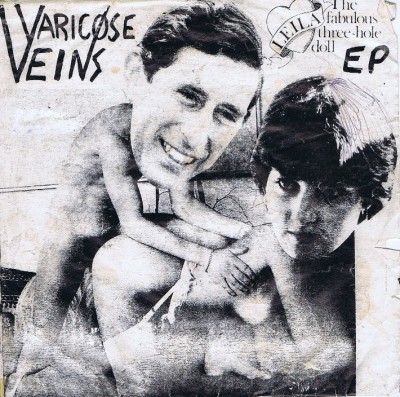 This was the home-made single cover (to be), for the Varicose Veins Lady Diana EP that was never released in 1981.

(Ian I really hope you don't mind me posting this!!)
Artefact added : 19th July 2010
by Christeen

varicoseveins Says –
Hi Christine,
I dont mind.You may be surprised but my art and Music career never took off.
Love Ian
ouch my heart

MrMass Says –
Would love to hear the tracks again lost the tape in 7" cover? years ago..Use to have a pint with Dale..and last saw the Veins at the Mayflower new years eve with Paul Travis's band Terroist guitars and crash..Think crash nicked the food..You had marsbar wrapers and johnnys pined to a jacket covered in gozz! happy days..

varicoseveins Says –
I have a copy somewhere.If you add you email i will try and fix a copy when ifind it.Did you know Dale died a few years ago.I dont have any contact with the other members so we cant do a reunion i would love have to played the Rebellion gig in Blackpool

Christeen Says –
Could you do me a copy too sometime Ian? x

holty2 Says –
I still have a copy of the tape,I was thinking of uploading it to youtube.

varicoseveins Says –
Thats a good idea .stick it on you tube.if you need pictures for it google bored teenagers varicose veins.let me know when you done it.

holty2 Says –
I have been on that site before,and it does not allow anyone to copy the photos. I bumped into an old punk who used to go to all the gigs i went to back then, in and around manchester.Got chatting about the scene then and it turned out he stayed at your house once ian.he was origanally ftrom scotland but lived in manchester at the time,now lives in bristol down the road from me,Laco is his nickname,ian mcleod is his real name,going out for a beer with him again in a couple of weeks.

varicoseveins Says –
My memorys not so good .I think i remember him .Send my good wishes.Cheers Ian

holty2 Says –
hi ian,have you got any photos or cuttings you can email to me, as i said i cant copy anything off that site.the video is almost done,but there is not enough veins photos in it yet. bwfcholty@msn.com

ShorPunk Says –
I have the EP on cdr I copied it from original tape from owner of XRecords "Steve" in Bolton in the 90s...I know of only 3 that exist. I also have a cdr album which you can buy off Discogs.

Hi Ian I used to travel from Oldham to buy bootlegs off you in Bury ....Notably the Pistols Belsen single. Well worth the bus journey. Also I was at the gig with the Damned when afterwards instead of going on the last few dates of the tour with the damned following DV and RS offering us to come, me and my mate decided to go and smash up UMIST with you and the boys. How many windows must have died that night! You were a great band.
If you'd like to leave a comment, please Login. Login
Manchester Digital Music Archive is licensed under an
Attribution-NonCommercial-ShareAlike 4.0 International License.
Charity no. 1164179
Our archive currently contains 3869 Bands, 758 DJs, 1460 Venues, 323 Industry Professionals and 29710 artefacts contributed by 4047 members.