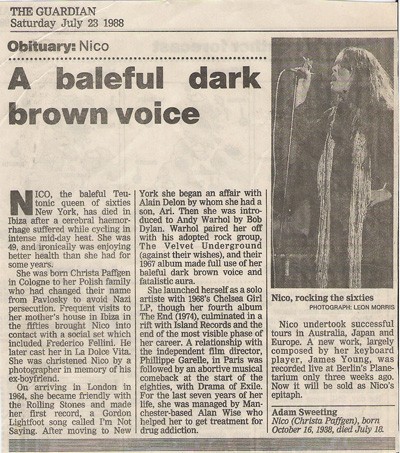 Although obviously Nico wasn't from Manchester, she spent the last years of her life living here.

The former model and Velvet Underground singer died in Ibiza.

Nico was managed by Alan Wise (of Wise Moves promotions).

Her keyboard player James Young (who is from Manchester) wrote a book about his experiences touring with a very smacked up Nico. The book is called 'Songs They Never Play on the Radio'.

I remember going to see her live in a room in Manchester Town Hall. She was playing with Eric Random and the Bedlamates. It was a great gig although I remember having to hold back my laughter every time she played a Velvet Underground song as about 3 or 4 goths would get up the front and do some sort of swirly girating dance. Then they'd go and sit down once the song had finished.
Artefact added : 5th June 2007
by scoot

Tony/Longfella Says –
There's a further Mcr connection to Nico, albeit a more convoluted one. No, it's not her "domestic partnership" with John Cooper Clarke. Nor is it her links with John Cale who was, in turn, linked to Factory.

In 1962 she had a son fathered by the French Actor, Alain Delon, who of course appeared on the front sleeve of the The Queen Is Dead. I did hear that letters between them were found in her former home in Prestwich. Now those would be an artefact!

mat Says –
that's right. he's in the 'Nico Icon' documentary- thanks, i'd forgotten about that.
If you'd like to leave a comment, please Login. Login
Manchester Digital Music Archive is licensed under an
Attribution-NonCommercial-ShareAlike 4.0 International License.
Charity no. 1164179
Our archive currently contains 3870 Bands, 758 DJs, 1461 Venues, 323 Industry Professionals and 29719 artefacts contributed by 4047 members.