Distractions
Record / CD / Tape
Out Of The Blue studio
2010 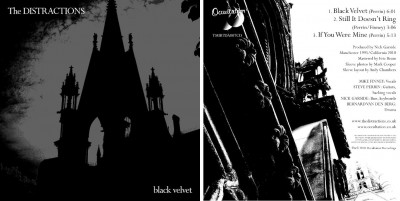 In the mid-1990s, after a fifteen-year silence, there were fresh Distractions. Original vocalist Mike Finney and guitarist/principal songwriter Steve Perrin put together a new version of the band, playing a handful of gigs around the north-west (including the Roadhouse).

They also entered the Out of the Blue studio in Ancoats run by bass player Nick Garside, and, with Garside on bass and Bernard Van Den Berg on drums, recorded a series of songs, many of these had been written for the original incarnation of the band but never recorded.

The band did record one song that the original line-up HAD done, Still It Doesn't Ring, which appeared on the band's criminally lost debut LP Nobody's Perfect. This is the second track on the new Distractions EP, Black Velvet, their first release in nearly 30 years, and their first proper release ever on CD - featuring some smart Mancunian artwork.
Artefact added : 3rd September 2010
by granata