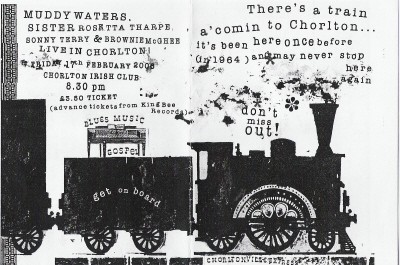 On 17th February the MDMArchive had a very special screening of a Granada TV program that was first transmitted in 1964. The Blues and Gospel Train was a fantastic 40 minute piece of music history... Muddy Waters, Sister Rosetta Tharpe, Sonny Terry and Brownie McGhee came to Manchester and filmed a performance on the platform of Chorlton Train Station (now a Morrison's Supermarket!). The station was made to look like a deep south shack, with a live goat roaming a round. The musicians boarded a train at Central Station (G-MEX). Whilst waiting for the train to turn up it poured with rain, giving Sister Rosetta Tharpe a chance to play an impromtu 'Didn't it Rain?'.

Details of the show can be found in Joe Boyd's book 'White Bycicles'.

The producer of the program was Johnny Hamp who did much for music and entertainment on Granada in the 60s. Johnny was guest at the screening and gave a few words and stories to a sold out crowd.
Artefact added : 5th June 2007
by scoot