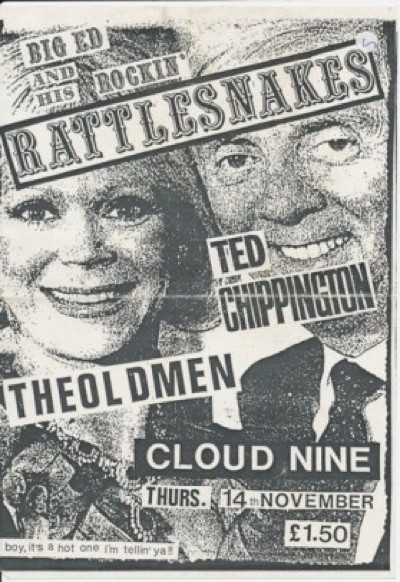 While I'm at it, another flyer for said same band.Ted Chippington,a very drole comedian;from Stoke I think.He pretty much started every joke with "I was walking down the road the other day......".I know I saw him on the bill with Frank Sidebottom somewhere..
Another aside..I'm pretty sure I was at a fashion show at Cloud Nine in the early Eighties where Hewan Clarke was the compere.Anyway as usual me and my partner in crime where mooching around in the back rooms up to no good,I 'll be bound, and as we walked back out into the venue there was old Brian Tilsley stood by the door with this girl,"giving her one" in the vernacular of the day;and as we walked past he just looked at us and said "alright lads" to which we replied "alright"...well what else could you do.....We found a packet of tampons later and were soaking them in beer and sticking them to the the ceiling;pathetic I know.....must have seemed like a good idea at the time.Just another night out in Manchester....Probably shouldn't be putting this stuff up...it's not really musical.
Artefact added : 11th September 2010
by dubwise-er

OT Says –
i went to college with someone from big ed and his rockin rattlesnakes (medlock art college - part of the poly) at this time. i got a feeling film critic mark kermode played with them at some point...

dj Says –
Bloody hell Ted Chippington, i saw him a few times in the 80s and he did start nearly every joke with 'i was walking down the road the other day'. He once supported the Fall and as a support act he would divide the audience into 50% who loved him and 50% who wanted to bottle him off the stage.

OT Says –
ted chippington is still around - he was supposed to perform at islington mill last year but failed to turn up...

crapitoutjim62 Says –
I still have Ted's one and only Lp somewhere, it has a great version of Elvis' Hound Dog on it. He was often played by John Peel may have even done a session cor him. Once again great post, many thanks.

Paul Day Says –
"I said to my friend, I'm in a dilemma" he said "nice cars, dilemmas" Ted, 1986
If you'd like to leave a comment, please Login. Login
Manchester Digital Music Archive is licensed under an
Attribution-NonCommercial-ShareAlike 4.0 International License.
Charity no. 1164179
Our archive currently contains 3735 Bands, 739 DJs, 1424 Venues, 260 Industry Professionals and 27741 artefacts contributed by 3844 members.