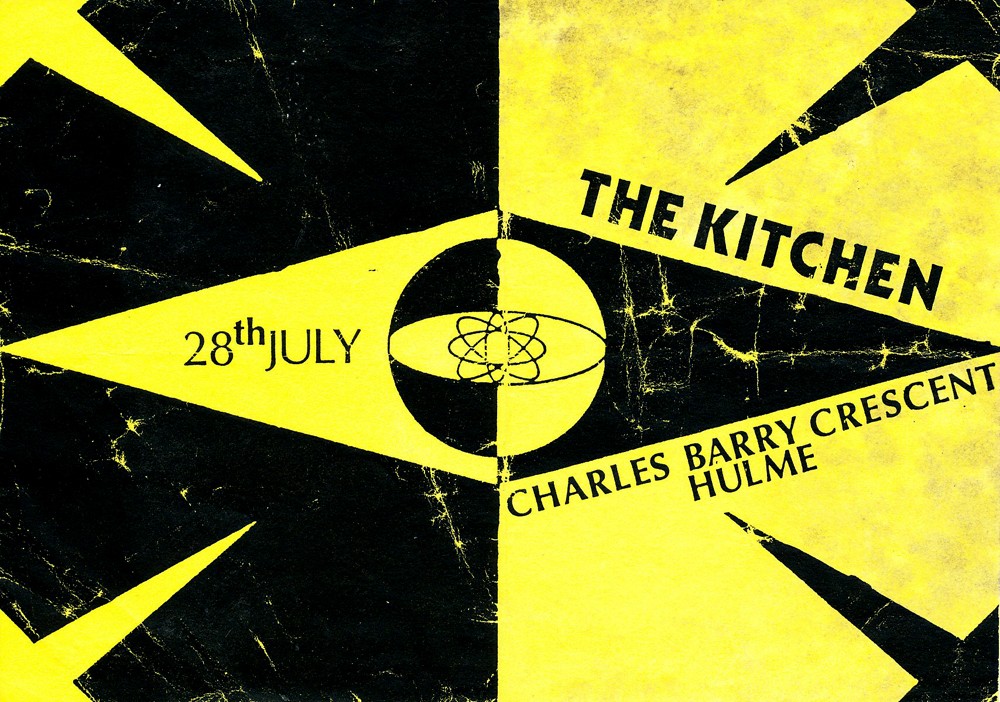 "The Kitchen was the club that really launched the Manchester late night scene, it took place in two flats knocked into one, on the top floor of the block behind the old Russell club. The Kitchen was the real reason to go out not the Hacienda (that was the warm up), open from 2am until the drug wore off, resident DJ’s the JAM MC’s" (Submitted 01.11.07)

This was a mad place;great!I’m surprised there’s even a flyer for it.It used to get totally rammed,especially on a Saturday when we’d pile out of The Russell and people would come from near and far.The lad who lived there was a rather quiet ,unassuming chap and you had to admire he and his fellow workers' dedication to breaking through those walls (even though it could keep you awake at nights,all for a good cause though).If you could manage to get up the stairs and into the “rehearsal” rooms next door ,there were always instruments you could play on.So lots of Manchester Muso types would be there jamming away with the likes of me,who couldn’t play owt,banging on the bongos or shaking a tambourine or something.I remember Peter Hook playing along at least on one occasion;he was good (well he’d have to be) and a bit hard to keep up with, especially when you’re pissed and not au fait with your instrument of choice.Used to pop around sometimes during the day if people were rehearsing just to see what was occurring.After a while pretty much stopped going along to the weekend shinanigans;it got even more packed with people queueing outside.There was always Beenie’s or some other Blues to go to....Eeeeh it’s like it were only yesterday.Don’t mind a trip down memory lane;hope I don’t slip into The Slough of Nostalgia...The Polis never bothered with Hulme which is why most of these things could occur.It just seemed normal at the time but with hindsight it wasn’t really.For the most part,except for all the crap bits,it was good.

Leah W Maynard Says –
I had my 26 birthday in there. Someone cs gassed it ! Great fun ! Fyi that was the only flyer ever put out I think.

Leah W Maynard Says –
I had my 26 birthday in there. Someone cs gassed it ! Great fun ! Fyi that was the only flyer ever put out I think.
If you'd like to leave a comment, please Login. Login
Manchester Digital Music Archive is licensed under an
Attribution-NonCommercial-ShareAlike 4.0 International License.
Charity no. 1164179
Our archive currently contains 3870 Bands, 758 DJs, 1461 Venues, 323 Industry Professionals and 29722 artefacts contributed by 4048 members.