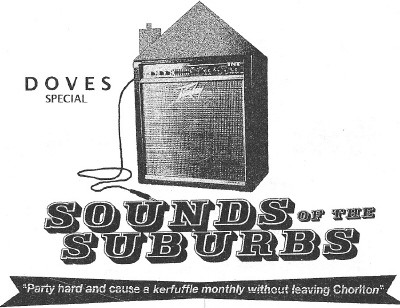 This flyer made me laugh!

'Party hard and cause a kerfuffle monthly without leaving Chorlton'.

Mike TV of Beats For Beginners certainly knows that most people in Chorlton don't want to leave the village, even to go to a club! The Southern (Hotel) is a pub near Southern Cemetry. It used to house a great Thursday night comedy club- The Buzz Club which was run by the corny Agraman (get it?).

This night at Sound of the Suburbs had Doves on the decks, something they have been doing more since the release of their last Lp 'Some Cities'.
Artefact added : 5th June 2007
by scoot