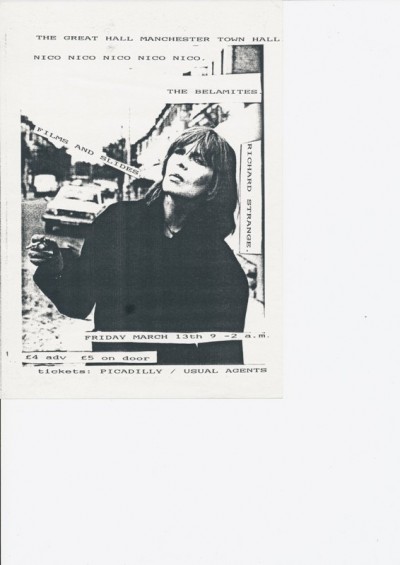 I remember seeing her the odd time, sat at the bar with her head in a book, in The Spinner's pub in Hulme.Don't remember anyone going up talking to her.Thinking back,that was the legendary Nico!...but it was a different time and place.Only saw her perform once.She came on towards the end of a Bauhaus gig,at Rafters,I think it was;maybe '82?Playing her harmonium,with Pete Murphy prancing around her like a cross between Marcelle Marceau and Rudolf Nureyev.At least he tried....
Went to a couple of those "One Tree Island" affairs,put on by Eric Random on the odd trip back to M/c,in the late 90's.They were bloody great!
Artefact added : 16th September 2010
by dubwise-er

dizzydrop77 Says –
i am gutted i never saw nico, but then im not.she is the epitome of anti-star and i loved her for it.she has become more in my life the last few years with her music,she was awesome.i did see nico in hulme, i never took interest because i used the same addresses as her,and as dubwiser says it was a different time & place then, in hulme.i think Nico- or christa paffgen, is the most unique female songwriter in my world and im glad she was trying to get well when she lived in manchester..just wanted to say that for nico.
If you'd like to leave a comment, please Login. Login
Manchester Digital Music Archive is licensed under an
Attribution-NonCommercial-ShareAlike 4.0 International License.
Charity no. 1164179
Our archive currently contains 3873 Bands, 759 DJs, 1464 Venues, 323 Industry Professionals and 29804 artefacts contributed by 4066 members.