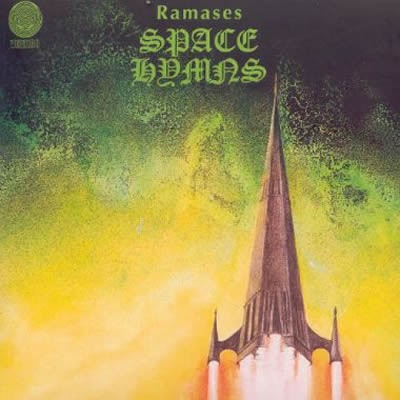 Ramesses and Sel were man and wife duo who lived in Stockport, they even went around in all the robes, they said they were reincarnations of the great Pharaoh and his wife and were millionaires from what I remember, they produced a first album called 'Space Hymns' an underground cult record which no self respecting hippy could be without, the songs on the album were as strange as them.

It was a brilliant album but was little known really, I loved it, the backing band band on the album were actually 'Hotlegs' later known as 10cc, this could actually be the first ever Hotlegs recording ever done at Strawberry, the song 'Life Child' was cracking and featured a great guitar solo by Eric Stewart, the rest of the songs were as strange as songs get really.

The cover was equally as good as the music, it featured a church with the spire blasting off for outer space and folded out into four LP size full colour poster, it must have cost a fortune and it was released on the Vertigo label, I can also confirm the original church on the cover was St Georges in Stockport, all in all a really superb and original which was so off the wall it slipped under the radar in my opinion, everyone I knew who had this album wore it out!!

I may be wrong but my best mate at the time, (Roy Mortimer) told me Rameses died in the sea at his beachhouse one morning, I remember thinking, jeez I wonder if he was trying to part it! strange album, strange days folks, www.phil-platt.com
Artefact added : 21st September 2010
by philplatt

Abigail Says –
Great write up, thanks!

philplatt Says –
Thanks Abigail, its always worth spending a bit of time to record gems like this album which prob not many people know about, my pleasure, Phil
If you'd like to leave a comment, please Login. Login
Manchester Digital Music Archive is licensed under an
Attribution-NonCommercial-ShareAlike 4.0 International License.
Charity no. 1164179
Our archive currently contains 3821 Bands, 747 DJs, 1444 Venues, 302 Industry Professionals and 29180 artefacts contributed by 3960 members.