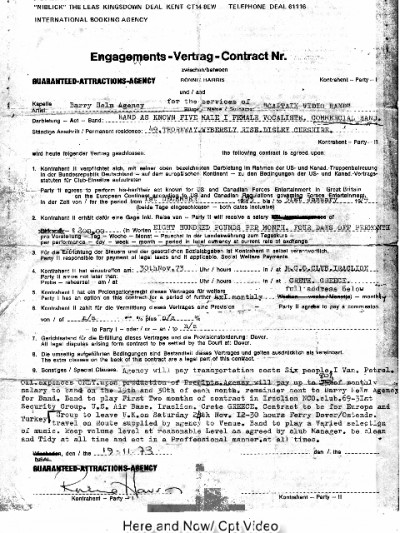 Here and Now started life as a club act around Manchester, we later cashed in on the Glam rock craze which appeared arouned that time playing Sweet, Glitter, complete with tacky plastic stage gear what made yah stink after 5 mins on stage! smelly glam gypsys livin in a van, gone with the dawn, the girls loved us!!

Me lead guitar and backing vox, Al Duffy, Lead vocals and fantastic gob harp, played in many Manchester bands in later years, now gone to the great gig in the sky along with the bass player Brian Johnstone both long term great friends of mine and greatly missed, Drums was Tony Roberts who later played on Jilted Johns 'Gordon Is a Moron' number 1 hit single, (Mike Doherty turned this drum session down coz he thought it was a crap song!! poor Mike, he never turned down another session again!!!

Cant remember the other guitarists name but he was Irish and was called Martin
Artefact added : 21st September 2010
by philplatt

philplatt Says –
The female vocalist on the contract was Al's wife, we added here just to get the gig, she could not sing a note but was great looking, would do well today methinks, hah