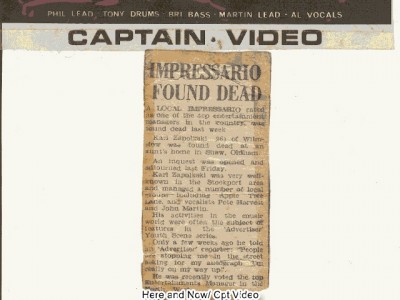 Not sure that this will be readable after upload, its an article about thedeath of our manager Karl Zapolski who died of an overdose, I remember ringing up one of the other guys after Karls mum told me the tragic news, I said, Hey have you heard about Karl, Yep Brian said, Bad news isn't it? I replied, Brian then said, yeh fu**in right its bad news Phil, he's dropped us right in the shit hasn't he!!!

He even asked me to ring up Karls mum again to get the gig list, Jeez proper hard as rock rock n roll stuff folks, hah you could not make it up, P
Artefact added : 21st September 2010
by philplatt