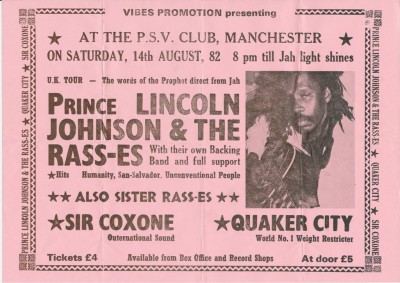 Flippin' eck! Just realised this scanner can flip things upside down and back to front so it reads backwards.Amazing! (but I can't fathom the point...).
More Dancehall business.... the falsetto man with The Royal Rasses. Think Quaker City were from B'ham.Just remembered one of my brothers lived in Brum;in Bournville.And because the Cadbury family owned the suburb and were Quakers there were no pubs in the area so you had to walk quite a way to the nearest tavern. One of The Inca Babies was part of that clan but he could be often seen drinking in The White Horse;wonder if he was ever excommunicated or what ever Quakers do...