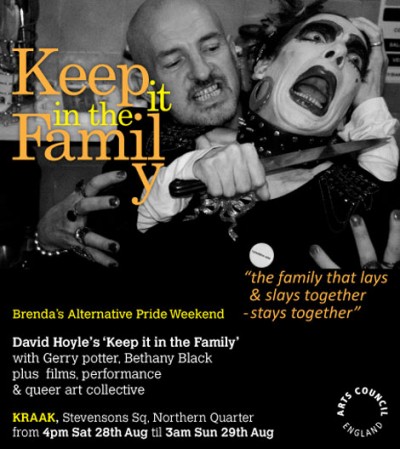 "On the glorious occasion of Pride 2010, Brenda will be dragging her tail feathers across the dancefloor of Kraak, the new gallery/cub space on Stevenson Square.

And who better to preside over this ramshackle bacchanal than Mr David Hoyle, who will be presenting the next instalment of ‘KEEP IT IN THE FAMILY’ - a series of six shows in which David and a special guest commentator explore 'notions of Truth, Honesty, Justice and The Authentique!' through a unique format of ribald and surreal debate.

As his guest, David has chosen his old sparring partner, the unforgettable Gerry Potter Poet, once Chloe Poems, always a true legend.

DO NOT MISS THIS DEBUT SHOW BY TWO CLUB BRENDA ORIGINALS!