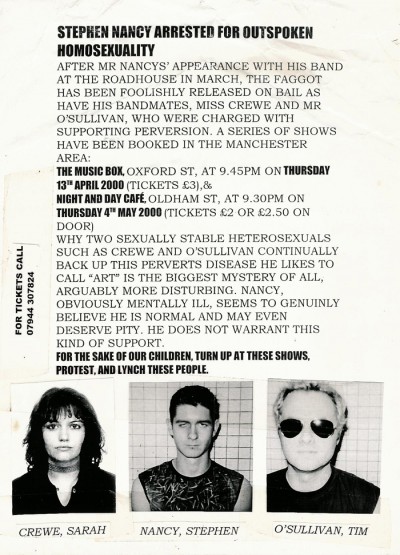 This poster campaign was accompanied by a graffiti spree remembered by many saying "FREE STEPHEN NANCY". The graffiti could be found on Canal Street, Market Street, in the Northern Quarter, and all over Manchester. Many people wondered if Stephen Nancy was a refugee. He was the singer in a local queercore band who was playing on gay history and making a campaign to get into the conciousness of Manchester at the same time. Some people apparently phoned the venue to warn them that the singer had been arrested for homosexuality, not realising it had been legal in the UK for some decades! Singer Ste was ironically arrested during the campaign at around 5am one Sunday morning, spray-painting the slogan somewhere near Oldham Street after being spotted on CCTV. Ironically, about 6 people showed up to the actual gig (only the 3rd ever Stephen Nancy gig), yet the whole City was talking about who the hell Stephen Nancy was.