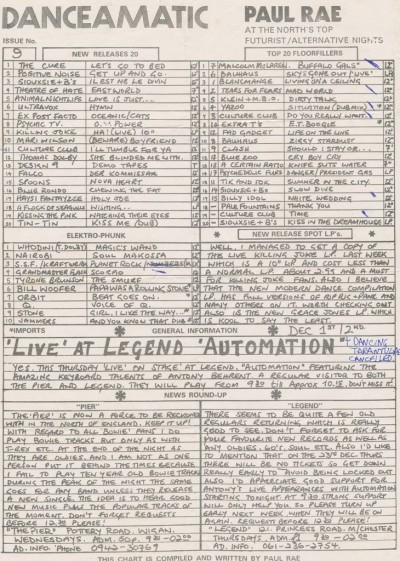 First time I heard “Buffalo Gals” I thought what the f**k is that! So different; really pricked up my ears .Was well surprised to be told it was that old codger Mr. McC......one step behind and three ahead of everybody else...as seemed his style. I seem to remember him faffing about one time , early on before a Bow Wow Wow gig at The Poly, with that air of bank manager/used car salesman about him. As I scribbled at the side of this flyer, Dancing Tarantulas with Automation ;apparently cancelled, but I know they both played there so it must have been another time.
That version of “Papa was a Rolling Stone”....be interested to hear that; and “Planet Rock” kept popping up. I presume the Grace Jones album was “Nightclubbing”; one of those albums that just seemed to crop up everywhere ; bit like “Tubular Bells” from round a decade earlier, or The Velvets “Banana” album from the Jurassic age. I don’t know if there ever was an extended mix of Ms. Jones version of “Use Me” but I would have loved that. Sly and Robbie at the control tower!
Artefact added : 22nd October 2010
by dubwise-er