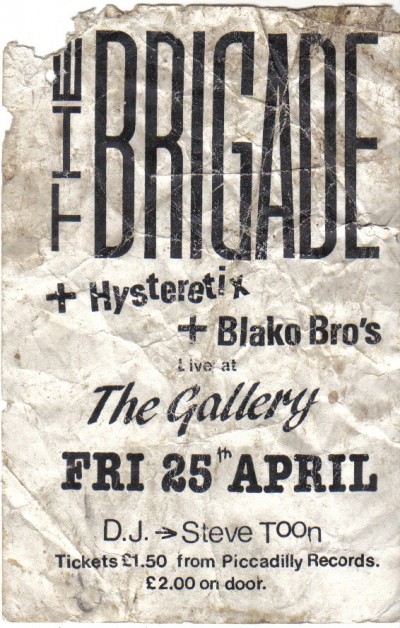 not sure what year this was?phil,you should know?
remember nothing of the Blako Bro's.
The Hysteretix first live outing,think they did maybe 4 gigs at most before 'musical differences' put a halt on proceedings!
Artefact added : 29th October 2010
by johng

johng Says –
one of those was a Stonehenge benefit gig at the old Factory club in Hulme,think it was called the PSV again by then,dont know how stonehenge benefitted from it ?
1988 was a guess on the year it took place.

philriley427 Says –
Wow. I can barely remember this! Good job someone was taking note.

It looks like this one was in your pocket a long time!

johng Says –
hiya phil,just got back intouch with pebble and he's been keeping it all these years,unfortunately his guitar playing days are over since a dog bit one of his fingers in half.
went to see the subs at witchwood a few months ago and bumped into one of the ex brigade members,cant remember his name,told me him and muppet go watching stalybridge celtic a lot,i try and get up to see em now and again,we drew 2-2 last night with yocal scumballz Droylsden lol!

johng Says –
@phil-remember Ray Gosling making the 'Human Jigsaw' series for Granada?he filmed the Hysteretix playing in the glents attic,interviewed a few of stalybridge,mossley and oldham punks,(i kept well out of the way,infact i might have moved to London at the time it was aired).
just wondered if you had it on video or know anyone who has it?would be good to put on the net,me and tommy been searching for it but its not to be found,poor old Ray,lost everything cos of his taste for the booze.good bloke.
btw-what is the name of the book nick,spike and chris wrote about stone circles and ancient monuments?your mum showed it me a few years ago when i dropped in to the house on ridge hill lane but ive forgot the title?
hope ur well m8.
g.
If you'd like to leave a comment, please Login. Login
Manchester Digital Music Archive is licensed under an
Attribution-NonCommercial-ShareAlike 4.0 International License.
Charity no. 1164179
Our archive currently contains 3814 Bands, 743 DJs, 1437 Venues, 298 Industry Professionals and 28491 artefacts contributed by 3918 members.