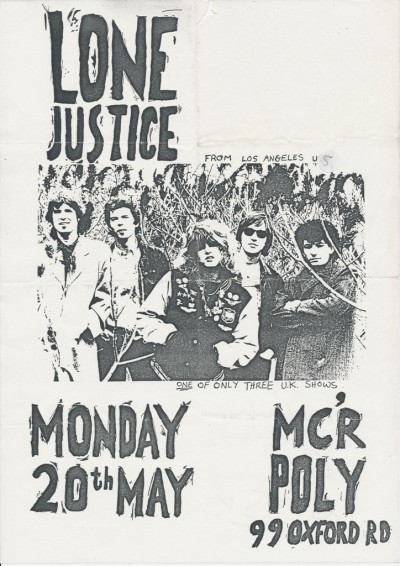 Lone justice at The Poly; probably went ‘cos it was free. I think they were part of that new Americana movement at the time (there always seems to be a new something even if it’s often just a revitalisation/ re-hash of an old something...), along with the likes of The Longriders and Jason and the Scorchers; who I've just remembered seeing at International 1, and were quite good as I recall.
I’m sure the only thing I would have known about Lone Justice was the singer’s brother had played in Love so that could have been the clincher. Can’t remember anything special about the gig; sweet vocals and a bit intense would be about it. She went onto have one of those blockbusting film soundtrack hits that seemed so prevalent in the ‘80’s, this one starring that brilliant and versatile actor Tom Cruise; how does he do it.....?
Artefact added : 5th November 2010
by dubwise-er