Mike Sax and the Vikings, Mike Sax And The Idols
Photograph
1965 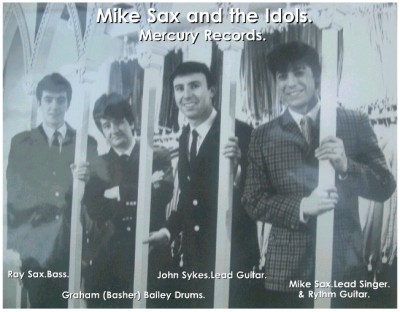 Mike Sax and the Vikings were formed in 1960.
At first they began playing local clubs around the
Greater Manchester area. After a couple of years
they were playing venues such as the Oasis.
Northern Sporting Club, Bernard Mannings Embassy
Club, and The Yew Tree, just to name a few.
In 1964 they secured a recording contract with
Philips.They were on the Mercury Label. At the
same time signing a publishing contract with
Feldmans music publishers.
Carl Wayne and the Vikings were already under
contract to Philips, so Mike Sax and the Vikings
changed their name to Mike Sax and the Idols.
Their first record climbed to No.1 Position in of all
places, Turkey, remaining in that position for 5
weeks.The title was 'Don't Walk Away'. An original
number composed by the group.
Their second original release was a Christmas song
'My Little One'.
In 1966 they played the summer season in Rimini
(Italy) gaining a huge following.
Their A and R man was Johnny Franz, who also
recorded, Dusty Springfield,The Walker Brothers,
and Carl Denver, Just to name a few.
Artefact added : 6th November 2010
by blackypudding