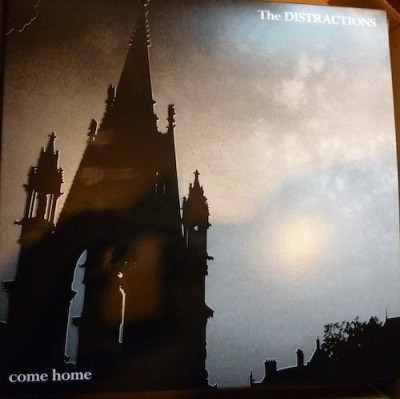 There's 'Lost,' which Perrin describes it as "a real toe-tapper with a lyric in which a bloke contemplates the pointlessness of his existence." There's 'Nicole,' a majestic song about a girl in the great Distractions tradition of majestic songs about girls. And there’s the only non-Perrin/Finney song here, Nick Halliwell's 'Oil Painting,' a song that nevertheless continues that old 'Nobody’s Perfect' feel.

"When the planning started for the possible new single," says Steve Perrin, "Mike and I had a discussion, the gist of which was that the Distractions in 2010 could sound any way that he and I wanted." And that sound, brilliantly, is the sound of the 2010 Distractions – guitars and vocals from men who have worked the popface long and hard, but losing none of the soul and vitality that they brought to their earliest work. With Liverpool production and California mixing by Nick Garside, Come Home is only the second Distractions 12" EP, but is very unlikely to be the last.

The record itself is to behold. Sleeves are in thick 350gsm card, with a UV spot-varnish finish on the front, making the Albert Memorial shot on the front stand out from the grey of the sky. The beautifully shot scenes of Albert Square were taken in the early morning by Mark Cooper. The vinyl is the highest resolution, mastered from a 24-bit/96KHz source and sounds superb. Keep an eye on the official Distractions website for news of the compilation album' 'Nothing,' due early 2001.
Artefact added : 18th November 2010
by granata