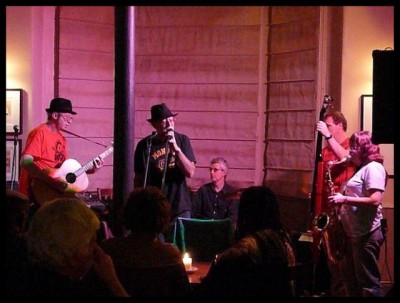 Bourbon Street Preachers
The band was formed in 2006 to work on a sound that would reflect the rich variety of music emanating from New Orleans and the wider reaches of Louisiana and the Mississipi Delta. Our name is taken from the famous Bourbon Street, New Orleans where live bands play in around 30 different bars every night of the week, supplemented by fabulous street artists and buskers. New Orleans of course is also home to some of the biggest and best Jazz and Blues festivals on the scene.
Playing a mixture of cover tunes and an increasing number of self penned numbers the band is heavily influenced by such great performers as Willie Dixon, Elmore James, Fats Domino and Clifton Chenier, contributing the best of the Blues and Zydeco. We have a residency at the Lloyds Hotel in Chorlton, Manchester, where we have played every Thursday since April 2007. The B.S.P.’s are gradually building a reputation as a band offering good solid entertainment through their performances around the North West English region and beyond. Hear us on www.myspace.com/b...
Our message is – We ain’t preachin’ Ree ligion Nooooooooooooo! We ain’t preachin’ Polly tics Nooooooooooooo! We’re preachin’ LIVE MUSIC! We’re preachin’ Laissez les bon temps roulez! So c’mon Let the good times roll!
Artefact added : 25th November 2010
by Dave Eatock

play them blues and SNUB the X factor.......;-)
see you in Lloyds
If you'd like to leave a comment, please Login. Login
Manchester Digital Music Archive is licensed under an
Attribution-NonCommercial-ShareAlike 4.0 International License.
Charity no. 1164179
Our archive currently contains 3734 Bands, 739 DJs, 1424 Venues, 261 Industry Professionals and 27925 artefacts contributed by 3860 members.