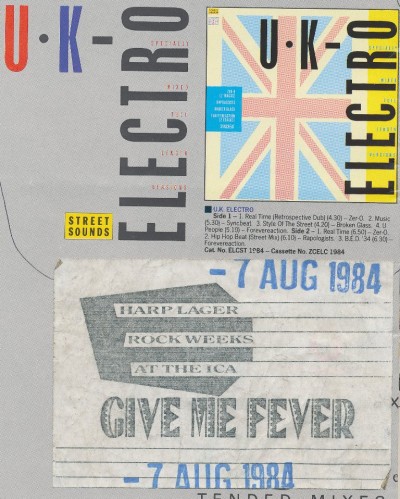 Went down to this with me mate Nasty (late of The Dancing Tarantulas ensemble) who was doing the support as Baron Von Nasty alongside Broken Glass crew. It was part of the whole annual I.C.A. rock week at the Southbank and I think it might have been the launch of this particular L.P.; one of a whole series of Street Sounds Funk, jazz funk and electro albums. It was round the time you couldn’t walk across St. Anne’s Square on a Saturday without having to choreograph your way around breakers, poppers, moonwalkers, Marcel Marceaux- dressed “ doin’ the robot-ers” (the last bit’s a bit porky but y’know worrimean ...).It was great to watch. I think, as a dance form, it’s up there with Lindy hopping from the ‘30s and ‘40s for energy and originality; totally unique.
I don’t know what the two lads doing the music called themselves, or how they came to contribute to the series with a seemingly juxta-posed title like “U.K. Electro” , but Andy Connell went on to form Swing Out Sister, having played in The Immediates, A.C.R. and Kalima.
I don’t think the Broken Glass young lads knew quite what to make of Baron’s non-dancing style which comprised of very badly executed break dancing moves (‘a la something cringeworthy your dad might do to embarrass you in front of your mates), gravity defining acrobatics ,leaping into the crowd ,having an epileptic fit, causing confusion and concern before running smack into walls ; all the while dressed as a musical conductor with a bad Rod Stewart wig on. The man would have needed amphetamines just to slow down; it was just his natural way. Anyway Broken Glass did their stuff on stage too, as watching two men twiddling knobs and pressing on keyboards is not always the most exciting and engaging thing unless you’re all of Kraftwerk, with a nice line in exotic headwear and with an eary and uncanny knack for moving in synch in a Gilbert and George fashion.
After the gig there was a bit of tension between some local kids and Broken Glass which resulted in one of those dance battle thingummybobs, (still in the daylight as I recall). Not sure how much of it was braggadocio, not being au fait with the workings of that particular dance genre or age group , (me being 24 = old, by comparison), but it was a jolly good spectacle worthy of several encores and I would have presented the winners with some flowers if I’d had them to hand.
Of course the Manchester crew won.....
Artefact added : 1st December 2010
by dubwise-er

Northern Groove Says –
The guys behind UK Electro were Greg Wilson, Andy Connell and Martin Jackson (formerly the drummer in Magazine). Wilson was previously the DJ at Legend, The Exit and The Hacienda, amongst other Manchester clubs, and made a successful return to DJing in 2003, nowadays playing all over the World (he was also manager and producer of the Ruthless Rap Assassins between 1987-1991). Connell and Jackson went on to form Swing Out Sister.

It was Broken Glass, not Breaking Glass – they battled with the Zulu Rockers, one of the main London crews, that night.

This was the one and only UK Electro gig.

Charlie Marbles Says –
Hi there,
Do you have any photos or can you remember anyone filming at that event? News or personal? I am digging for as much documentation for a significant project I am developing charting the impact, evolution and continued influence of hip hop in the UK.
Thanks,
Charlie Marbles
If you'd like to leave a comment, please Login. Login
Manchester Digital Music Archive is licensed under an
Attribution-NonCommercial-ShareAlike 4.0 International License.
Charity no. 1164179
Our archive currently contains 3744 Bands, 739 DJs, 1423 Venues, 277 Industry Professionals and 27961 artefacts contributed by 3878 members.