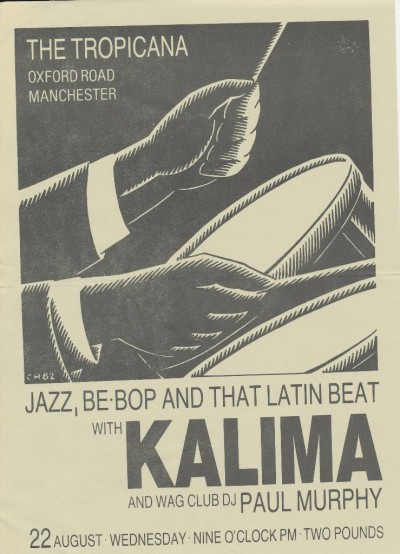 Similar time, Similar peeps. If I thought I didn’t know any better, looking back at some of these flyers and bands, one might think the whole Jazz/Funk scene in M/c at that time was a tad incestuous ,but one has probably being sat in front of the computer too long, isn’t one....No doubt a few bands were linked though, radiating out from A Certain Ratio and with floating line-ups.
Just remembered there was a pub near Manchester cathedral called The Bishop’s Mitre (?) which for a short time seemed to be some sort of H.Q. for newly zoot-suited and booted bright young things and finger poppin’ daddios. T’weren’t my particular kettle of spam as I wasn’t partial to “West Side Story” juvenile delinquent fashion or interested in not taking wooden nickels; was more interested in staying away from the brown acid. (My old man went to see West Side Story 17 times apparently when it first came out; not sure why?? Great music and dancing though; also my missis has seen Iggy/Stooges 17 times...same applies. I’m not sure I’ve ever done anything of import 17 times.....starting to ramble; must hurry up...).
Also, on a different tack, but in its own way a point of interest and history, Manchester Cathedral contains a “Green Man “ ,a fairly rare and significant carving, with its roots presumed to be in ancient pagan or druid culture, a bit like the wicca man. (In Peter Greenaway’s “The Draughtsman ‘s Contract” there’s a green character keeps cropping up; wonder if that’s some convoluted reference to it? then again, with Greenaway how would you know? He was the best thing in the film!).anyway just thought it was interesting; worth checking out if you’re ever strolling by....
Artefact added : 1st December 2010
by dubwise-er