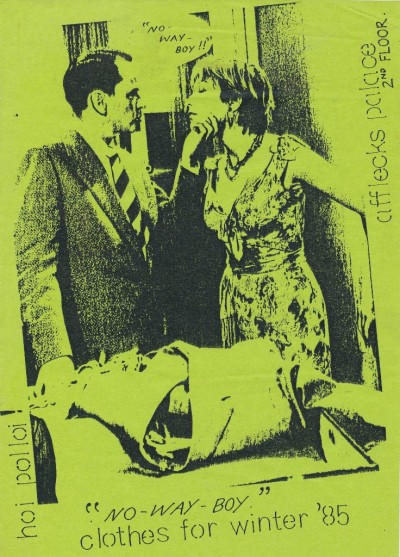 Afflecks and Brown had been a big department store when I was a youth; probably closed mid ‘70s before re-opening again as Afflecks, maybe ’82? Paulden’s in Moss Side had been the same. That was in a big old building which in the late ‘60s, during the vast inner city demolition which went on, was pretty much the last building standing where once there had been street after street of Victorian terraced housing. During the late ‘60’s/ early 70’s every time you went through Moss Side whole streets would be turned to rubble, using those old wrecking balls to do the job. As far as you could see on the Boundary Lane side there was just wasteland with fires smouldering and burning, waiting for the brave new world to rise from its ashes. Pauldens then moved into the city and later became Debenhams.
Afflecks got off to a pretty slow start. The downstairs opened with the 50p shop and there was a smattering of stalls on the first floor; bit more like a church hall fete than a fashion establishment. Everybody used to go round the markets then; Wythenshawe had a Monday 2nd hand market, Oldham on a Wednesday, Salford on Thursdays I think; Ashton, Harpurhey etc., Anyway you’d be sure guaranteed if you went along to one of these on any given day you’d see someone who was running a stall in Afflecks. Can’t remember when the upstairs opened but it was probably around ’84 and it had started to get a bit upmarket ,with stalls selling new(er) stuff and small cafe type stalls selling real (!!) coffee which was still a bit of an unknown as, up till then, like most places in the U.K. you asked for coffee and you got instant (nowt wrong with that...).Also, the first time I ever had avocado was in one of these fine dining establishments on the top floor ,July ’86 ;(I remember...more for something else that happened than that though, honest!). A mate had just inherited some money and decided to “spend, spend, spend!” My” avocado and whatever” sandwich came under the first ”spend” splurge.
Having not been in it for a number of years, when I saw it again in ’94 it had truly expanded into a labyrinth and certainly changed seismically from its humble beginnings, with prices to reflect its new found status as the complete fashion hub.
Well I got rained off work today, finishing the outside of a house, and so it gave me a chance to get quite a few more uploads done. Been at it most of the day and as usual my head has started to = cabbage; got to get my head back into December 2010....Devil/ idle hands and all that....he didn’t stand a chance. Well I must go and practice my Kegel exercises before watching the latest Eskimo porn “Let’s Get Innuit Pt 7” ; I hear it’s got a good sub plot and there’s a twist at the end.........whatevers...........
Artefact added : 1st December 2010
by dubwise-er