The Change, Shades Of No One
Photograph
Cargo Recording Studios
1979 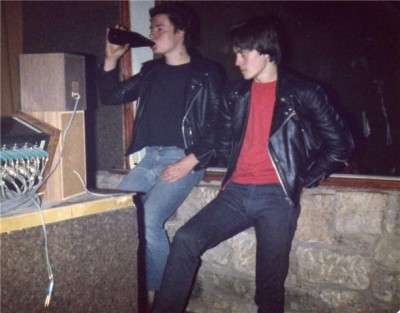 picture showing rob, guitarist from "shades of no one" in the controll room at cargo studios with foz from "the change".....rob is on the right without a beer (strangely).

these two bands along with "fast cars" regulary played together at the wishing well in swinton...oh happy days.
Artefact added : 5th December 2010
by foz

It's very strange looking at that photo, as I have no other pictures from those days. Nice one Foz, much appreciated.

The only other images I've seen of any of us are just faces in the crowd from the old 'So It Goes' footage, bouncing around at the Electric Circus and the Elizabethan Belle Vue to the Clash, etc.

foz Says –
hopefully someone will unearth something....this pic comes from bass player dave turner but is the only one we have......so anyone out there with any pics lets see em !

Wedge Says –
Hi Fozzy dude Ow yer doin. Rob rang me at work today. Blew my ead off. I thought that part of my life was lost to distant memory.
It's really weird seeing the photo as nI've not any photo's from that era.
it would be great if someone out there could find some more.

foz Says –
eh up wedge man how the devil are you......glad i got to blow you head off cos as we know thats a good thing..unless it's with a gun which is bad :)

anyway..i trust you are ok and i hope that someone comes up with more SONO stuff..these recent comments will probably make it into the monthly news letter in the most commented section. it goes out to all members so fingers crossed as i for one would love to see more stuff.

one last thing..jan lost her phone which had your email address...if you still got her number (same one)..then text it dude and i'll be in touch.

Darran Says –
How do, Foz: how's it hanging?

No doubt that's a bottle of stout in the picture....? It would account for your slightly portlier than usual appearance ;-)

I don't know if Rob mentioned it, but there's a FC United fund raising night at Gullivers next Saturday night (10th Dec'), a 'Sandinista' 30th anniversary tribute do, with a Clash covers band, DJ's, & Atilla the Stockbroker's doing a set 'n all.......Rob said he's more than likely coming down for it......don't know if me & Gill can make it though (unless a shift change can be arranged...).

Wedge Says –
O.K. Foz man
I'll send you my e.mail from my phone. Maybe we need to get together post xmas. I'd be willing to come up to Manchster or whatever.

wedge....you should have one in your inbox...if not let me know here or by text.

darran....dont think i can make said gig...rob sez 11th..you say 10th so dont know if it's the same doo anyway....there is a punx inna jungle gig on the 11th as well but i'm probably not gona get to that either (@jabez clegg) ....cant say as tribute/covers bands are my thing...bit of a sore point.....things may change between now and then but i just dont know at this point....i'll probably have a look at gullivers window this afternoon for more info.....laters people.